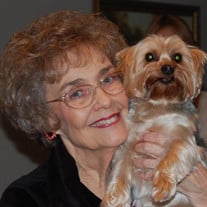 Margaret Carr Krantz, age 87, passed away at her home in Spring, TX, on Thursday, December 2nd, 2021. She was born on November 7th, 1934 to the late Merland and Mabel Carr in the small farm town of Hunter, North Dakota, where she was raised. As a young woman Margaret met Louis E. Krantz, Jr., the man who would become her husband, in Fargo, North Dakota. Louis was a minor league ball player for the New York Yankees franchise and Margaret stole his heart the night they met; in fact, that night, Louis told his buddy with him that he would marry her one day. Margaret and Louis wed on April 11th, 1955 and celebrated their 66th wedding anniversary earlier this year. Margaret was a devoted wife, mother, mee-maw, great mee-maw, sister, aunt, and friend. She was a homemaker extraordinaire that raised 3 children. She also had a passion for taking care of others; it was her calling in life. From family members to friends, she could be counted on for love and support through the good times and the bad. She befriended many through the years and her famous fudge list was constantly growing. Margaret loved the Christmas holiday season and always ensured it was special for her family and friends. She took pride in her appearance and was always dressed to the nines with her beautiful clothing, sparkly earrings, and pins. She will be remembered by all who knew and loved her for her infectious smile, those beautiful blue eyes, her generosity, and her ability to make each in her life feel very special and loved. Margaret is survived by her husband, Louis E. Krantz; sons Skip Krantz, Steve Krantz and wife, Sabrina and her daughter, Sherry Krantz. She is also survived by 7 grandchildren and 8 great grandchildren. In addition, she is survived by her sister, Sharon Radebaugh and her husband, Curt from Minneapolis, Minnesota, brother in-law, Jack Mehall of Arizona, and several nieces and nephews, and many friends. Margaret was preceded in death by her parents, Merland and Mabel Carr; sisters Sandra Mehall and Harriet Capetz, and her brother-in-law George Capetz.

Margaret Carr Krantz, age 87, passed away at her home in Spring, TX, on Thursday, December 2nd, 2021. She was born on November 7th, 1934 to the late Merland and Mabel Carr in the small farm town of Hunter, North Dakota, where she was raised.... View Obituary & Service Information

The family of Margaret Krantz created this Life Tributes page to make it easy to share your memories.

Margaret Carr Krantz, age 87, passed away at her home in Spring,...

Send flowers to the Krantz family.