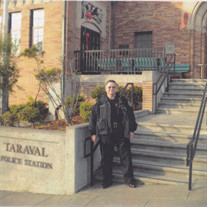 Born in Guatemala City, Guatemala to Froilan Ceballos and Victoria Argueta. He came to the United States at the age of 6 in 1958. He grew up in San Francisco and graduated from Mission High School in 1970. He served in the United States Army from June 1971 to June 1974 when he was honorably discharged. He married his first wife, Maria Ramirez, and had three daughters together - his three greatest blessings in life. After being discharged he enrolled at San Francisco City College where he began classes in Criminology and took the San Francisco Police Department entrance exam in the fall of 1974. He passed his written and physical exams and shorty thereafter started at the police academy. He was sworn into the San Francisco Police Department on November 17, 1975. He received his AA degree in Criminology during his first year as a police officer while working at the Ingleside station midnight watch. He dedicated his life to serving the city of San Francisco for the next 35 years until he retired on November 14, 2010. He remarried Margarita Nieto in 2003 and they moved to Houston, Texas following his retirement where they spent the rest of his life together. Mario was a very thoughtful and generous person who loved spending time with family and dear friends. He adored his three grandchildren who he made a point to visit in California at least twice a year. He was a wise and noble man who had a way with words and an ability to give a memorable and heartfelt toast regardless of the occasion, no matter how large or small the crowd. He had a great sense of humor and loved to make people laugh. He loved to BBQ, and go camping. He enjoyed music and movies, especially an action film and Marimba music. One of his favorite pastimes was watching sports, particularly soccer and boxing, and although he lived in Houston for the latter part of his life he always stayed true to his Bay Area teams. Mario was beloved by all who knew him and will be greatly missed. He was Daddy, Papa, Papa Mario, Marito, Chino, and Mariuchi, He is survived by his wife of 17 years, Margarita Nieto Ceballos; his three daughters Marissa Myers and her husband Brian, Miriam Ceballos, Myrna Dettlinger and her husband David, and his three grandchildren Bryson, Kristianna, and David, Jr; his siblings Armando Diaz, Edgar Ceballos, Sylvia Ceballos Chavez, and many cousins, nieces, and nephews. He is preceded in death by his first cousin Luis Rodolfo Ceballos.

Born in Guatemala City, Guatemala to Froilan Ceballos and Victoria Argueta. He came to the United States at the age of 6 in 1958. He grew up in San Francisco and graduated from Mission High School in 1970. He served in the United States Army... View Obituary & Service Information

The family of Mario Froilan Ceballos created this Life Tributes page to make it easy to share your memories.

Born in Guatemala City, Guatemala to Froilan Ceballos and Victoria...

Send flowers to the Ceballos family.