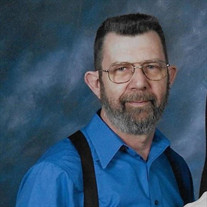 Marion “Bud” Anderson passed away peacefully early morning on Wednesday, January 13th, 2021 at 76 years of age. Bud was born on May 11, 1944 in Richmond, Indiana to parents Robert Luke Anderson and Jessie Marie (Johnson) Anderson. He spent his early years in Indiana where he graduated from Union School Corporation in 1962. Shortly after, he married Mary Lou (Bullock) Boykin and he became a father to his first born daughter, Michelle (Anderson) Schlottman. In the coming years they moved to Houston, Texas to pursue his career in printing. Though he and Mary Lou parted ways some years later, he would go on to meet his wife of 35 years, Cindy (Ross) Anderson. They were blessed with three more children Robert Nicholas Anderson, Ashley (Anderson) De La Cerda, and Emily Anderson. Bud tirelessly worked to provide for his family through his work as a pressman; a career to which he dedicated over 50 years. When he wasn't working, Bud enjoyed scouring resale shops for trinkets, watching his grandson play football, and spending time outdoors in the Smoky Mountains where he will be taken to rest for eternity. He is survived by his wife, Cindy Anderson, his children: Michelle Schlottmann and husband Don, Nicholas Anderson and wife Desiree, Ashley De La Cerda and husband Edward, and the youngest of his children, Emily Anderson, his five grandchildren: Austin Schlottmann and fiance Lauren Pilcher, Caleb Anderson, Noah Anderson, Celeste Anderson, and Elena De La Cerda, sisters: Pat Graham, Joyce Wyramon and husband Fred, Glenda Cline and husband Jim, and Sheila Wilkerson and husband Perry, and many cousins, nieces, nephews, and friends. He is predeceased in death by his father Robert Luke Anderson and mother Jessie Marie (Johnson) Anderson, brothers Raymond Anderson, and Paul Eugene Anderson, as well as his niece Kimberly (Wyramon) Chasteen, and brother-in-law Hank Graham. A memorial will be held in his honor on Friday, January 22, 2021 at 4pm at Addison Funeral Home 18630 Kuykendahl Rd Spring, Tx 77388.

The family of Marion Sam Anderson created this Life Tributes page to make it easy to share your memories.

Send flowers to the Anderson family.