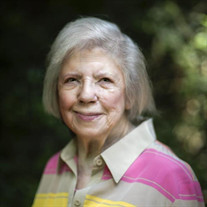 Marjorie Steele Sutton passed away in San Antonio, Texas on March 30th, 2021. She was born in Weir, Mississippi July 29th, 1926. Marjorie grew up with seminal moments in U.S. History. She was just a child during the Great Depression, and a teenager during the bombing of Pearl Harbor and World War II. After the War, Marjorie started working at Western Electric as the only female. It wasn’t long after a man named William Clyde made a delivery to her office. She liked to joke around that after the meeting, Clyde would make frequent stops to keep seeing her. According to Marjorie the two biggest moments in her life were the day she accepted Jesus Christ as her lord and savior. The second was when she married the love of her life William Clyde Sutton III. They were married on Nov. 23rd, 1949 and spent the next 59 years in love. Together they would raise four children, 10 grandchildren, and 14 great grandchildren. Nothing made the two happier than opening their house and having family gatherings. Marjorie was really known as “Gram” to all of grandchildren, great grandchildren, and extended family. Marjorie and Clyde lived in many places making wonderful friends and memories in Memphis, Cincinnati, Atlanta, and The Woodlands outside of Houston. Marjorie loved to play the piano, cook, and read. It was their last stop in The Woodlands, where Marjorie and Clyde retired. Bible study became a huge part of their lives, and the friends they made at church became their second family. They treasured the moments together and loved traveling together. Later in life Marjorie refused to let the world pass her by. You could often find her texting friends, face timing family members, reading on her iPad, and playing fantasy football. She often liked to brag to her doctors about playing fantasy football to keep herself active. Marjorie was a huge sports fan and often told stories of seeing Mickey Mantle and Willie Mays play, calling people traitors who rooted for the Titans after her beloved Oilers left Houston, and taking huge pride in her Astros winning the 2017 World Series. Marjorie didn’t miss a pitch that entire season. For the last six years Marjorie lived in San Antonio with her daughter Sheri and her husband Jim, whom she considered to be another son. She was blessed to have Sheri and Jim share their home with her, but Sheri and Jim felt blessed to have her there. Their home became the place for family gatherings, and celebrations including Marj’s 90th birthday celebration attended by family and friends from around the nation. Marjorie lived an incredible life as matriarch of a giant family who will continue to take her life lessons and pass them down to future generations. Though we are saddened by her loss, we are comforted that she lived life to the fullest, and that her and Clyde are once again together. Marjorie is survived by her children Alan Sutton and his wife Connie; Chip Sutton and his wife Sylvia; and Sheri Mixon and her husband Jim. She is also survived by her brothers Don, and Bob Steele. Marjorie is also survived by her nine grandchildren Jennifer Haney and her husband Dustin; Jeff Sutton and his wife Robin; Jessica Lochner and her husband Brian; Scott Moseley and his wife DeeDee; Carissa Livingston and her husband Gary; Lindsay McRae and her husband Jay; Brittany Kamitsis and her husband Eli; Curtis Sutton, and Spencer Sutton; In-laws Tim Mixon; Brandi Mixon and her husband Scott Deavers. The joy of Marjorie’s life were her 14 great grandchildren Denim, Stella, Raiden, Millie, Duke, Jay, Trinity, Tia, Tiffani, Katelyn, James, Bowen, Melanie, and Will; In-laws Hunter Zambrano and his wife Audora; and Melissa Mixon. Lastly the great, great grandchild of the family baby Jimmy Zambrano. Marjorie was preceded in death by her husband William Clyde Sutton, her daughter Andrea Bush, her granddaughter Melanie Bush, her sister Sylvia Gordon, and her brother Guy Steele. In lieu of flowers the Sutton family requests that donations be made to St. Judes Children's Hospital https://www.stjude.org/donate/donate-to-st-jude.html

Marjorie Steele Sutton passed away in San Antonio, Texas on March 30th, 2021. She was born in Weir, Mississippi July 29th, 1926. Marjorie grew up with seminal moments in U.S. History. She was just a child during the Great Depression, and a teenager... View Obituary & Service Information

The family of Marjorie Steele Sutton created this Life Tributes page to make it easy to share your memories.

Send flowers to the Sutton family.