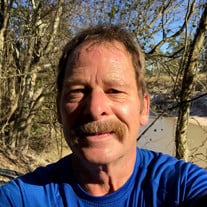 Michael Brian Garrett was born on March 17, 1958 in Bakersfield, California. His family moved to Durango, Colorado shortly after. They then resided in Midland, Texas where he lived through elementary school before moving to Cypress. He attended Arnold Junior High and Cy-Fair High School. He graduated in 1976. After graduation he attended Austin College in Sherman, He grew up loving all things outdoors. He hiked, fished, golfed, hunted and skied. He was always up for any type of challenge and hated to lose. He met Peggy in March of 1993 at a place called Tin Hall. Peggy saw him leaning against the wall and told her sister, "He's cute. He looks like Allen Jackson." Patricia, her sister, later went and offered him a drink to dance with her sister. He said, " I have to see what she looks like first!" They have been together since. He also gained two children from his marriage, Kim and Chris. He loved them from day one and has always been there for them. He rode in a bike community where he had numerous friends and they became his family. He passed away doing what he loved. All though he is gone, he will never ever be forgotten. Michael is preceded in death by, son, Christopher Krause and father-in-law, James Chambers He is survived by wife, Peggy Garrett, parents, James and Betty Garrett, daughter and son-in-law, Kim & Curtis Cavazos, Grand-Daughter, Avery Cavazos, brother & sister-in-law, Ron & Lesley Garrett, sister & brother-in-law, Sharin & Charlie Scott, nieces, Lindsey & Lauren Scott; Kayla Clendeninn, nephew, Zachary Garrett, brother-in-law and sister-in-law, Russell and Patricia Oliver, mother-in-law, Josephine Chambers and many other relatives and friends.

Michael Brian Garrett was born on March 17, 1958 in Bakersfield, California. His family moved to Durango, Colorado shortly after. They then resided in Midland, Texas where he lived through elementary school before moving to Cypress. He attended... View Obituary & Service Information

The family of Michael Brian Garrett created this Life Tributes page to make it easy to share your memories.

Send flowers to the Garrett family.