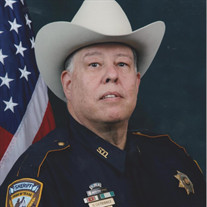 Natividad “Nat” Gutierrez, Jr., 68, of Livingston, Texas, went home to be with the Lord on Tuesday, August 17th, 2021. Nat was born at home on May 18th,1953, in Houston, Texas to the late Natividad Gutierrez Sr. and Olivia Gutierrez. He graduated from Aldine High School in 1972. Nat worked in construction with his father for several years after high school where he learned building skills that he used in projects on his property. He joined the Harris County Sheriff’s Office in 1979 and was promoted to Sergeant in 1984. After 38 years with the HCSO, he retired in May of 2017 with respect and admiration from his fellow officers for his passion for the job. Throughout his service, he received Rookie of the Year, his Master Peace Officer Certification and was awarded Officer of the Year in 1982. Spending time with family and friends brought him the most joy. In addition, Nat enjoyed traveling, music of all genres, craftsman and building projects, fishing, photography, muscle cars and attending sports events, especially the Astros. In retirement, he purchased a travel trailer with which he and Cookie enjoyed visits with family in various locations. Most importantly, Nat was a man of God, and cherished his relationship with the Lord, his Savior. Nat is preceded in death by Natividad Gutierrez Sr. He is survived by his wife Carla (Cookie) Gutierrez, mother Olivia Gutierrez, daughter Angela Fruge and husband John, son Tony Gutierrez, stepson Michael Trapp and wife Shelby, stepson Aaron Trapp and wife Mari, stepson Dustin Davidson and wife Danielle, Siblings; Robert Gutierrez and wife Yolanda, Ann Novark and husband Tom, Oscar Gutierrez and wife Susan. Grandchildren; John Michael, Annie, Cannon, Anthony, and Ava Marie Fruge; Ethan, Julianna, Arion, and Micah Trapp; Mindy and Jeanette Davidson. Also survived by sisters and brothers-in law (Bland Family), and numerous nieces and nephews.

The family of Natividad Gutierrez created this Life Tributes page to make it easy to share your memories.

Send flowers to the Gutierrez family.