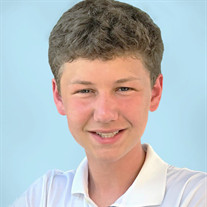 Nickolai Joseph Dowden was born to Donald and Svetlana Dowden on October 14, 2003 in Milwaukee, Wisconsin. He was a sophomore at Klein Oak High School in Spring. Although his alarm clock was set for 7:00 am Monday morning to start a new day; mishandling a weapon resulted in his tragic loss of life unexpectedly through the night. In comfort and love, Nick’s mother held him in her arms as he began to fade to eternal rest. At an early age Nick began flying remote controlled helicopters and loved aviation. He played a variety of team sports at The Woodlands YMCA, which his dad often coached. Nick enjoyed basketball and was an outstanding tennis player. He loved music and was not shy about singing along no matter who was around. Nick loved playing video games with his brothers, and friends, and watching Netflix, especially The Office. Being 16, he already had his car picked out. Nick was always ready to help others. He enjoyed figuring out how things worked. He talked about joining the Marine Corps, then becoming an architect. He was kind, easy to talk to, and full of laughter and jokes. Many friends have mentioned how easy Nick was to talk to. People described Nick as considerate of others feelings and ensuring their comfort. At church camp this summer in Florida, he made many new friends, strengthened existing relationships, and gave his life to Christ by being baptized in the ocean. Nick spoke to his family often about so many dear friends who were important to him, and those he enjoyed spending time with. He was preceded in death by his paternal grandfather, David Dowden, his maternal grandmother, Larysa Yezikova, and his uncle, David Dowden. He is survived by his parents Don and Svetlana Dowden, brothers Maxim and Alexander, paternal grandmother Dorathy Dowden, maternal grandfather Vladimir Yezikov, and a host of aunts, uncles, cousins and friends. What we take with us is, if you knew Nick, you know he often had that wry smile on his face, followed by quick wink to say everything will be okay. The Addison family and staff extend our heartfelt condolences to Nickolai's family in their time of loss.

Nickolai Joseph Dowden was born to Donald and Svetlana Dowden on October 14, 2003 in Milwaukee, Wisconsin. He was a sophomore at Klein Oak High School in Spring. Although his alarm clock was set for 7:00 am Monday morning to start a new day;... View Obituary & Service Information

The family of Nickolai Dowden created this Life Tributes page to make it easy to share your memories.

Nickolai Joseph Dowden was born to Donald and Svetlana Dowden...

Send flowers to the Dowden family.