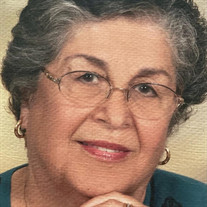 Nuha Habiby Hazzan passed away peacefully in her home on Sunday, October 3, 2021. She was 89 years old. She is predeceased by her husband Wadih Hazzan who passed away in 1985. Nuha is survived by her children, Nona Ash (David); Nadra Breir (Souheil); Jamal (Anne Marie); and Jihad (Jacqui), eight grandchildren, Don Ash (Jennifer), Allison Ash Holloway, (Jack) Abed Breir, Mazen Breir, Christopher Hazzan (Heather), Kelsey Hazzan Marino (Justin), Edward Hazzan (Sephie), Charles Hazzan (Hannah), and eight great grandchildren; Thomas, Peter, James, Adeline, Audrina, Aria, Hazel and Harvey. Nuha was born in Haifa, Palestine on February 23, 1932, to Wadie and Anisa Habiby one of eight daughters and one son. She moved with her family to Cairo and Syria where she married Wadih Boutros Hazzan. They lived in Beirut, Lebanon before they immigrated to the United States. Together they raised their children and lived in Buffalo, NY, Anchorage, AK, and Long Island, NY. Nuha moved to Houston, TX in 1986 after her husband’s passing to be close to her son and family. Nuha was a devoted wife and a loving and caring mother. She supported her husband during his long career with Scandinavian Airlines. Nuha was a nurturing mother, an amazing home maker, great cook and warm hostess who enjoyed entertaining her family and friends. She was a talented seamstress and enjoyed cross stitching, knitting and crocheting. She was very proud of her children and their families and often traveled to be with them. Nuha had a great sense of humor, a warm smile and an open heart. She enjoyed traveling and spending time with her family and sisters. In addition to her children and grandchildren, Nuha is survived by five of her sisters and two sisters-in-law. Funeral and memorial service to celebrate Nuha’s life will take place on Friday, October 29th at Christ The Good Shepherd Catholic Community Church, 18511 Klein Church Road, Spring, TX 77379. Rosary at 10:30 and 11 am Mass. In lieu of flowers, donations can be made to https://www.stroke.org

Nuha Habiby Hazzan passed away peacefully in her home on Sunday, October 3, 2021. She was 89 years old. She is predeceased by her husband Wadih Hazzan who passed away in 1985. Nuha is survived by her children, Nona Ash (David); Nadra Breir... View Obituary & Service Information

The family of Nuha Hazzan created this Life Tributes page to make it easy to share your memories.

Nuha Habiby Hazzan passed away peacefully in her home on Sunday,...

Send flowers to the Hazzan family.