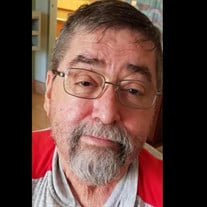 Omar Lozano Sr. (74) of Spring, TX passed away on Monday, August 2, 2021 at 5:27 p.m. from complications due to organ failure. He was born August 4, 1946 to Roberto and Albesa Lozano in Falfurrias, TX. He was a great big brother to his sisters Almira and Diana. He had a pet cow named Nancy that he always talked about. He attended Falfurrias High School where his love of sports began. He attended Delmar College in Corpus Christi, TX. He later moved to South Houston to follow his lifetime career in the Oil and Gas Industry at Gray Tool Company (GE), where he ultimately retired from. He learned the trade of a machinist. He had a very strong work ethic and provided for his family in every way. He met his wife, Delia Macias through his childhood friend Esteban in 1970. Esteban was married to Delia's sister, Josefina. Omar and Delia dated for 8 years before they married on December 29, 1978. Omar and Delia had two loving children: Amanda Delia Lozano and Omar Lozano Jr. He sacrificed and worked the morning shift in order to spend more time with his children. He was not a morning person! He gave his children and wife a beautiful life. He was a longtime member of St. Edward Catholic Church where his children attended elementary school and continued their Catholic education through high school. On November 4, 2019, Omar got the greatest blessing of becoming Grandpa to a beautiful granddaughter, Alejandra Isla. His eyes would light up every time he saw her. He instilled the importance of good work ethic, education, and the love of family. He had the kindest heart. He gave so much in his lifetime. He had a soft spot for the sick, especially children. He donated to several charities. St. Jude was his favorite. We will miss his wonderful sense of humor and his love of tortillas! He was preceded in death by his parents, Roberto and Albesa and his niece Melissa Flores. He is survived by his caring wife Delia, his favorite daughter Amanda (Adrian), his pride and joy son Omar Jr. (Gracie), the new family favorite granddaughter Alejandra Isla, his sister Almira (Ruben) Flores, his sister Diana Lozano, and many other family and close friends. In lieu of flowers, please donate in memory of Big Omar to: St. Jude https://fundraising.stjude.org/site/TR/GiftFunds/GiftFunds?px=7135841&pg=personal&fr_id=39300

Omar Lozano Sr. (74) of Spring, TX passed away on Monday, August 2, 2021 at 5:27 p.m. from complications due to organ failure. He was born August 4, 1946 to Roberto and Albesa Lozano in Falfurrias, TX. He was a great big brother to his sisters... View Obituary & Service Information

The family of Omar Lozano Sr. created this Life Tributes page to make it easy to share your memories.

Send flowers to the Lozano family.