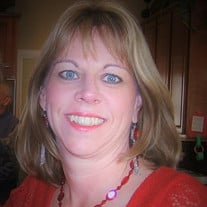 With our deepest sympathy, we announce that Paige Hall Castor of Tomball, Texas passed away after a courageous five year battle with cancer on October 3, 2020. Paige was born in Houston, Texas on December 31, 1965 and was the youngest of four children of Philip and Helen Hall. She lived in Houston until the age of twelve and had many fond memories of her childhood there. At that time her parents moved to Yoakum, Texas where she helped them manage the family convenience store they owned. She graduated from Yoakum High School and began a new venture in San Marcos, where she went to Texas State University. There she was a journalism major and one of her proud accomplishments was being station manager for the radio station at Texas State. In 1989, she graduated with a Bachelor’s Degree in Arts. Paige met her husband Paul at a family wedding in her senior year of college. Paige and Paul’s first date was in Galveston, Texas where they fell in love and they knew they would be together forever. On August 25, 1990 they were married and shortly thereafter, they were blessed with two boys Philip and Hayden. Paige loved her boys and was a big volunteer for all of their school activities. She loved watching Philip play football and Hayden in Band. She loved living in Houston and watching the Houston Texans, Rockets, and Astros. One of her greatest memories was going to Game 5 of the 2017 World Series. Her favorite time of the year was Christmas. She loved decorating and spending Christmas Eve with Paul, Hayden, Philip, and Tori watching “It’s A Wonderful Life”. She also loved seeing her friends and family at her two favorite parties of the year, the Super Bowl Party and the Academy Awards Party. Paige’s love can best be described as being the most loving Daughter, Sister, Wife, Mom, Aunt, and Friend. She always put God first. Her childlike faith gave her strength and courage throughout her life. Her family and friends meant everything to her. In her last days, she wanted everyone to know how much she loved them. Paige is survived by her husband Paul Castor, her sons Philip Castor and Hayden Castor, her parents Philip and Helen Hall, brother Scott Hall and family, brother Douglas Hall and family, brother-in-law Earl Castor and family, sister-in-law Coni Castor Fox and family. She is preceded in death by her brother David Hall and niece Samantha Hall.

With our deepest sympathy, we announce that Paige Hall Castor of Tomball, Texas passed away after a courageous five year battle with cancer on October 3, 2020. Paige was born in Houston, Texas on December 31, 1965 and was the youngest of four... View Obituary & Service Information

The family of Paige Hall Castor created this Life Tributes page to make it easy to share your memories.

With our deepest sympathy, we announce that Paige Hall Castor...

Send flowers to the Castor family.