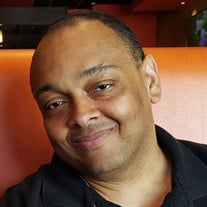 Patrick Fitzgerald Handy graduated from this life to be with our Savior on January 23rd, 2022 at the age of 56. He was born on July 4th,1965 in Lafayette, LA and spent his childhood and adolescence in Crowley, LA. He is preceded in death by his parents, Sherrie and Dorris Handy and his in-laws, Judy and James Barnhouse, along with other family members. He attended Crowley High School and had many job experiences. He moved to Houston and while working at a shoe store, he was persuaded by a customer to come work at the restaurant where she was the manager. That was the beginning of a long line of service work at many different restaurants including Frys, Pappadeaux, and most recently, Lupe Tortilla. He was truly made for that kind of work as he loved to talk to people and had a servant’s heart. He made a random phone call one Monday night and that is how he met his lovely wife. They started dating in May and were engaged by December and were married on April 27, 2002. They had their one and only beautiful and talented daughter three years later. Patrick worked hard to provide for his family but he always found time to spend with them and attend important events. He also indulged in his hobbies of collecting superhero gear, fidget spinners, and Hot Wheels. He was a big kid at heart and made everyone around him laugh. He had an amazing love for music but you could also count on him to change the words to any song for a good chuckle. He also had an intense passion for cars and could be found checking out any vehicle anywhere. You always knew he was coming down the street with his loud car and the music blaring. He was a faithful believer in Jesus Christ and spent his life growing and learning how to be who God wanted him to be. He would engross himself in studying the teachings of spiritual leaders and pursued the truth for his own life. Even at the end, with his battle against pancreatic cancer, he said he had been chosen for this path and he would follow as he was led. His lasting testimony is to live the life God wants you to live. He is survived by his devoted wife, Tammie Handy and their amazing daughter, Jadin Grace Handy. He also leaves behind his sisters, Luwana Angel and husband Darian; Angilique Falcon and husband Gregg; Dori Henry and husband Armond, his sister-in-law, Bridgette Stinnett and his brother-in-law, Charles Barnhouse and his wife Leslie. He was the fun-loving uncle to Victoria Handy; Gregory, Gabrielle, and Garrett Falcon, Zane and Isabella Henry; Joshua Stinnett; and Nicholas and Jaxson Barnhouse. He will also be remembered by numerous other family members and a multitude of friends. He left a lasting impression on all those who were lucky enough to have crossed paths with him. The family will have a gathering following the service at the home of Charles and Leslie Barnhouse at 19403 Yaupon Green Ct, Spring, Texas 77379. The family would like to extend their heartfelt appreciation for all the love, support and prayers during this time.

Patrick Fitzgerald Handy graduated from this life to be with our Savior on January 23rd, 2022 at the age of 56. He was born on July 4th,1965 in Lafayette, LA and spent his childhood and adolescence in Crowley, LA. He is preceded in death by... View Obituary & Service Information

The family of Patrick Fitzgerald Handy created this Life Tributes page to make it easy to share your memories.

Patrick Fitzgerald Handy graduated from this life to be with...

Send flowers to the Handy family.