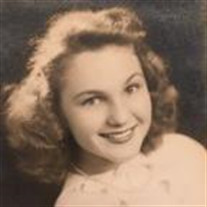 Patsy “Pat” Faw, loving wife, mother and grandmother, passed away, Friday, January 31, 2020 at the age of 92. She was born on July 7, 1927 in Houston, TX to Stanley and Hazel Blouin. They lived in the Heights in Houston on Key Street. Pat married Melvin Faw (Red) on March 29, 1948 and they enjoyed 58 years together. Pat was a homemaker her entire life. She enjoyed sewing, cooking, crafts, entertaining and travel. She always said, “All I ever did was wash and iron, cook and clean.” That was not really the case as she also enjoyed fishing and hunting with Red and was always ready to bait her own hook and help with the dressing of her deer. Pat and Red were always ready for a new adventure and traveled extensively with her brother Chip and his wife Anne. They traveled all over the U. S. and Europe. Family and friends always said that her specialty was her chocolate cream pie. We have all tried to duplicate it, but none have been as good as hers. She also had a soft spot for animals, loving her pets, including dogs, cats, rabbits, ducks and even chickens. Pat lived in Texas all her life, calling Corpus Christi, Old Washington and Houston home, with Houston being her favorite. Pat enjoyed her grandchildren and always came up with ideas to entertain them especially at the farm in Old Washington. She really enjoyed the farm, but was she was a ‘city girl’ and was glad to get back to Houston whenever she could. Every weekend she and Red would have guests. The farm was where they could relax and enjoy their friends and family on weekends. She and Red hosted many huge family dinners on holidays. With the biggest being Thanksgiving. Those remaining to cherish her memory are her two children, Lee (Nancy) Faw and Carol (John) Roehrig; her grandchildren Nicholas (Kari) Faw, Joshua Faw, Caroline Roehrig, and John Roehrig; great-grandchildren Noah and Ryan Faw; sister-in-laws Janet Wise and Anne Blouin. Pat was preceded in death by her husband Melvin, her parents Stanley and Hazel Blouin, and brother Stanley (Chip) Blouin. Memorial contributions can be made to Unlimited Care Cottages or Heart to Heart Hospice. Funeral services were held at the Houston National Cemetery Chapel on Thursday February 5, 2020. She was placed in Columbarium C-6, Niche C144 with her husband Red. Her memorial marker will be in place in 30-45 days.

The family of Patsy Ruth Faw created this Life Tributes page to make it easy to share your memories.

Send flowers to the Faw family.