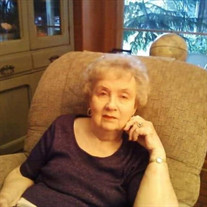 Pattie June “PJ” Brack Walden Pettigrew, age 92, passed away on Wednesday, June 16, 2021 in Houston, TX. She was born on October 3, 1928, in Delta County, Texas. She was the only child of R.D. & Edith Hooten Brack. She is preceded in death by her parents, her first husband Marvin Walden, second husband John Pettigrew, and many aunts, uncles, and cousins. Pattie June is survived by her son Tim Walden and wife Anita, daughter Lezlee Carnivale and husband Chuck, son Harry Walden and wife Susan, step daughter Sheila Bost and husband Tom, step son Terry Pettigrew and wife Kathy. Grandchildren Jennifer Bischoff, Jeremy Moore, Paul & Denae Walden, David Walden, Emily Walden, Amy & Matt Henegar, Luke & Whitney Bost, Emily & Chad Baxter, Paul & Alyssa Bost, 3333Kassy Pettigrew, and Codi Pettigrew and many great grand children. She is also survived her cousins Edna Earl Hornsby, Shirley Dyess, Shirley Ray Hooten, and Terry Robnett. Pattie grew up in Klondike, Texas, in Delta County, where she lived on the Hooten family farm with her cousins. Pattie and her parents moved to the Dallas after the Great Depression. Pattie met Marvin at church and they were married in November, 1949. Pattie and Marvin were members of the Saner Avenue Church of Christ in Dallas for many years before moving to Houston in 1965. Pattie raised her children and worked at ATT & Southwestern Bell in Dallas. Marvin passed away from cancer in 1969, leaving her a single mom. She worked and retired from Spring Branch ISD as the school secretary of several elementary schools. She married John Pettigrew in 1981, and they lived happily until his death in 2003. Pattie was a longtime member of Memorial Church of Christ, Houston, TX, where she served as a bible class teacher, nursery care taker, and where ever she was needed to serve. She opened her home up to many. Pattie’s outgoing personality and words of wisdom will be missed by all that knew her.

The family of Pattie Pettigrew created this Life Tributes page to make it easy to share your memories.

Send flowers to the Pettigrew family.