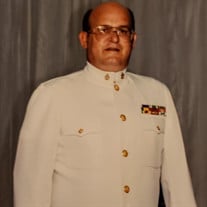 Chief Petty Officer Rex Bond, USN (Ret.) was a loving husband, father, grandfather, leader, mentor, coach, and friend. He stood his final muster August 4, 2021. The Chief passed quietly with his wife, Carole, by his side. Rex was born in Twin Falls, Idaho, on November 16, 1948. As a child he lived in Mississippi before growing up in Anahuac, Texas. After high school, Rex joined the US Navy, serving as a Corpsmen with a Marine Rifle Company (Bravo Company 1/7) during the Vietnam War. During combat Rex earned a Purple Heart for wounds received in a grenade blast. Afterwards he continued a life of service to his country and retired after 27 years of military service. His adventures saw him living in ten states, one trust territory, and four countries. In high school, Rex was a varsity athlete, lettering in football. As a young Corpsman, he saved lives; as a Chief Petty officer he mentored sailors. A devoted father, Rex served as a Cub Scout Troop Leader and coach for youth soccer and baseball. His love of sports continued throughout his life, and he faithfully followed the Texans and Astros. After a career in the US Navy, Rex embarked on a second career in Jakarta, Indonesia. There, Rex managed logistics and procurement for an international medical company. His second career spanned nearly another decade during which he traveled extensively throughout South East Asia, designing medical clinics and ambulances. Rex ultimately retired in The Woodlands, Texas, where he enjoyed bird-watching, gardening, reading, backyard barbeques, and putting his years of life experience to test with nightly viewings of Jeopardy. Rex was preceded in death by his parents, Warren and Beryl. Rex is survived by his wife of 44 years, Carole; three children, Samantha Bond (Didier Fort), Colin (Maggie) Bond, and Richard (Katrina) Bond; five grandchildren, Alexa and Keegan Fort, William Bond, and Desmond and Zora Bond; his sister, Lynn Stanley; and brother, Richard Bond. The family will host a virtual memorial service on Saturday, September 25. Details to follow. In lieu of flowers please donate to the Navy-Marine Corps Relief Society (https://www.nmcrs.org/) No services will be held through Addison Funeral Home at this time.

Chief Petty Officer Rex Bond, USN (Ret.) was a loving husband, father, grandfather, leader, mentor, coach, and friend. He stood his final muster August 4, 2021. The Chief passed quietly with his wife, Carole, by his side. Rex was born in... View Obituary & Service Information

The family of Rex Neal Bond created this Life Tributes page to make it easy to share your memories.

Send flowers to the Bond family.