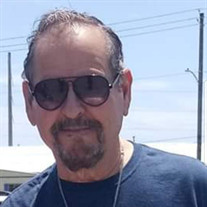 Ricardo Rodriguez Cavazos was born May 6, 1946 in Nuevo Leon Mexico to Guadalupe Rodriguez and Heriberto Cavazos. He was the 3rd born among his siblings including Ramiro Cavazos, Ludy Garza and Olga Banda. At the age of 17, Ricardo came to Texas and eventually made his way to Florida for a short time picking oranges. He later returned to Houston and met a beautiful woman named Mary Alvear at a local movie theater. A year later, on April 12, 1969 the two were married. The young couple made a life for themselves in Houston. Their family grew to include 4 beautiful children and 5 grandchildren whom he adored dearly. His working days as a painter were enjoyed by good times with close friends and family. He was known as the Whistleman to the neighbors because they loved to hear him whistle as he began his early mornings and kept busy pacing all around throughout the day. He was a simple and honest, hard working man who took care of his family. He was always available and ready to help as his body allowed. His home cooked meals were made with love and accompanied by whistling and singing no matter the time of the day. Though his cooking was frequently fought over, his love and conversation was always shared. While he would not openly admit it, his love for family pets and other animals around him was also apparent by the way they would surround him and have their own conversations. His love for music, a beer in hand and dancing with all the women in his life are memories numerous people enjoy. Ricardo departed this life on Sunday, January 26, 2020. He is preceded in death by his parents and brothers in law. He is survived by his wife of 50 years, Mary Cavazos, daughter, Ana Marie Flores and her husband Joe, son, Ricardo Cavazos Jr and his wife Katrina, son, Daniel James Cavazos, daughter, Claudia Lynn Cavazos as well as his 5 grandchildren: Xavier Maglalang Cavazos, Alize Marie Flores, Mariah Priscilla Flores, Nathan Ramiro Cavazos and Dominic Cavazos. Others left to cherish his memory include his sisters, sisters in law, an abundance of nieces and nephews, extended family, friends and neighbors.

Ricardo Rodriguez Cavazos was born May 6, 1946 in Nuevo Leon Mexico to Guadalupe Rodriguez and Heriberto Cavazos. He was the 3rd born among his siblings including Ramiro Cavazos, Ludy Garza and Olga Banda. At the age of 17, Ricardo came to Texas... View Obituary & Service Information

The family of Ricardo R. Cavazos created this Life Tributes page to make it easy to share your memories.

Send flowers to the Cavazos family.