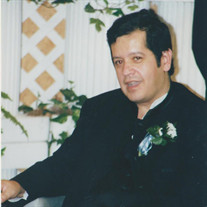 On December 16, 2020, Ricardo Ortiz Sr., age 66, left his wheelchair and disabled body to join his Heavenly Father and his Saviour, Jesus Christ. He was greeted in Heaven by his father, Jesus Banda Ortiz, his mother Rebecca Gasca, step-father Jose Rodriguez, brother Raul Ortiz, grandchild Taylor Fry, bestfriend John Hunt and several nephews. Still on Earth to treasure his memory is his wife, Karen, children; Christy Ortiz, Stephanie and Brandon Shafer, Ricky Ortiz and Betony Hartgrove-Freile, three granddaughters; Jasmine and Lily Freile-Ortiz and Kaylee Fry, brother Jorge and Debbie Ortiz, four sisters; Irene and David Hardin, Diana and Ernie Villa, Teresa Bischof, and Mary Martens. Rick was born on February 3, 1954 in Brownsville, Texas. His family moved to Chicago when he was two years old. At 18 years of age, he joined the army where he worked as a radio operator. After a three year stint, he and Karen moved to Elgin, a suburb of Chicago, where they welcomed their two daughters. They later moved to Arkansas where their son was born. They then moved to the Houston area where he lived out the remainder of his life on Earth. Rick loved books and built up an extensive library that consisted on inspiration, finance and religious works. His favorite authors included Tony Evans, Max Lucado and Dave Ramsey. He also enjoyed continuing his education by taking online courses in a variety of subjects, earning certifications in auto upholstery, tv/vcr repair, auto mechanics, locksmithing, computer and appliance repair, and electronics. He was often found at the hospital anytime a newborn made their grand entrance. He loved holding the little ones. One of his greatest joys was sharing in the birth and growth of his three grandgirls. He was super proud of the beautiful, young ladies they have become. He will always be remembered for his tenacity, his determination to never give up, his love for babies and children, his infectious smile and laughter, and his generosity and willingness to help others in any way he could. If you wish to make a donation in Rick's memory please consider the following; HISplace Family Church 5302 Spring Stuebner Rd. Spring, Texas 77389 (https://hpfc.org/) Children's Cup 888-624-4895 (www.childrenscup.org) Either by direct donation, or sponsoring a child. Pallbearers Ricky Ortiz Jorge Ortiz Richard O'Blanis Ronald D. Covington Joshua Hardin Jerry Eubanks Honorary Pallbearers Brandon Shafer David Hardin Ernie Villa

On December 16, 2020, Ricardo Ortiz Sr., age 66, left his wheelchair and disabled body to join his Heavenly Father and his Saviour, Jesus Christ. He was greeted in Heaven by his father, Jesus Banda Ortiz, his mother Rebecca Gasca, step-father... View Obituary & Service Information

The family of Ricardo Ortiz Sr. created this Life Tributes page to make it easy to share your memories.

Send flowers to the Ortiz family.