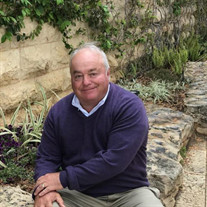 Richard Craig Gieseke was the first of six boys, born to Florence Gostomczik and Louis Gieseke. He was born on September 6, 1952, in Blue Earth Minnesota, Richard passed away October 27, 2021. You can tell a lot about a man by his thoughts. Richard’s thoughts can be captured by what quotes he kept close to him in his scriptures and where he read them daily. Such as “ Richard grew up in Central Iowa. 4-H was a regular activity for Richard, as well as little league. Captain of the Saydel High (Des Moines Iowa) Chess Team, Richard was an athlete and excelled in wrestling and golf. Golf became a lifelong passion. His parents and grandparents were Minnesota farmers. He learned gardening early in his life. His dad, Louis was an exceptional gardener. Richard taught Highschool science for a few years. He and one of his fellow teachers started a landscaping business and a small nursery in 1979. He became a member of the church in March of 1979 and married Susan Deville in June of 1980. His landscaping business took off in 1981 and he did that full-time from then on. He ran a small nursery on Tomato St. in Spring, Texas and he added other nurseries and properties over the next 30 years. In 1990 his first child, Eliesa, a daughter was born and came into his life. A Second daughter, Rachelle, was born and came into his life in 1994. He enjoyed raising these two girls and teaching them how to play softball, drive a golf cart, and nurtured their own interests whatever they were. He was a softball coach and would make all the girls giggle when he would show up to the Gator Girls team practice with a small alligator head attached to his trademark hat. He had many dreams about doing the landscaping for the Houston temple before the temple was even announced. He had a hand in designing the beautiful grounds there. His nursery business continued to grow, and his family grew to include a son-in-law and 2 granddaughters. He participated in Temple service for many years as an ordinance worker. It was the highlight of his days, and he made many close friendships through that service. He was always willing to lend a hand or assistance of any kind to anyone in need. His heart was very big, and he loved making the earth a more beautiful place. He was an artist designing beautiful landscapes, and creating a peaceful atmosphere with trees, shrubs, and flowers. He was always interested in discussing spiritual and doctrinal topics with his friends and he loved being social! He was generous to a fault but so loved for it. Richard is survived by his wife, Susan, his daughters, Eliesa Wright, and Rachelle Gieseke, his son-in-law Orrin Wright, his granddaughters, Cheyenne and Charlotte Wright, his brothers Ronnie, Jeff, Jim, Randy, and Jerry, his parents-in-law, Margarita and Dudley Deville, his sisters-in law Grace Deville Walker, (Joe Walker), Mary Cochrane (Roderick Cochrane), Vivian Brown (Darby Brown), his brother-in-law Anthony Deville, as well as many nieces and nephews he loved and was always interested in. Pall Bearers: Ronnie Gieseke, Jeff Gieseke, Randy Gieseke, Jim Gieseke, Orrin Wright, Anthony Deville.

Richard Craig Gieseke was the first of six boys, born to Florence Gostomczik and Louis Gieseke. He was born on September 6, 1952, in Blue Earth Minnesota, Richard passed away October 27, 2021. You can tell a lot about a man by his thoughts.... View Obituary & Service Information

The family of Richard Craig Gieseke created this Life Tributes page to make it easy to share your memories.

Richard Craig Gieseke was the first of six boys, born to Florence...

Send flowers to the Gieseke family.