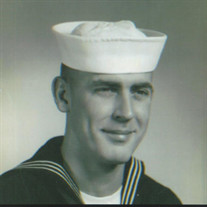 Richard Edward Nowak, Sr., 79, died peacefully in his sleep on July 30, 2020. Richard was born in Buffalo, New York on August 17, 1940, to Clara and Edward Nowak and was the youngest of two children. As a family, they moved to Denver and then to Kansas City, always returning to Buffalo each year to visit family. They eventually settled in Houston, Texas in 1950, where Richard attended All Saints Catholic School and St. Thomas High School. Richard served as an altar boy, and played baseball and golf. Richard also proudly served in the United States Navy from 1962 to 1966 during the Vietnam War. Richard met the love of his life, Sandra Lobue, on a blind date. He always said that he knew the day he met her that he was going to marry her. While in the navy, on a two-day pass, he drove 1500 miles from San Diego to Houston to spend a few hours with Sandra, and then turned around and drove right back. He married his "Special Angel" on November 28, 1964, and had 7 children. Their love story was beautifully told in their mutual devotion to each other, in their playful spirit and in their everyday life together. It was a fairy tale romance and a beautiful example of a Christian marriage. Richard and Sandra shared a love for the Lord and their strong, Catholic faith. Richard was a 46-year member of St. Edward Catholic Community and supported the church's many fundraising efforts and capital campaigns. Richard was a true family man through and through, always putting God and family first, despite working many long hours. He always managed to make time for his family and saw to their every need. Richard instilled in his children the values of working hard, making sacrifices, being generous and giving to others, and always putting forth your best effort. In early years, Richard worked at Doreck's Auto Service and Southern Pacific Railroad. He started his 43-year long career with Reed Roller Bit Company in 1966, retiring in 2009. Friends and former coworkers attributed Reed's being a great place to work to Richard, referring to him as a leader, a dedicated supporter, a great mentor, an advocate of change, and a demanding boss, always expecting the best from everyone as he gave nothing but his best in return. Richard was most content when spending time with his family, and as long as he had Sandra by his side, he was a happy man regardless of what he was doing. He enjoyed his wife's cooking, he enjoyed cars and trucks - looking at them, working on them and buying them, fishing and hunting with his sons, playing with his grandchildren (he was a master paper airplane maker and avid collector of locust shells), the telling and re-telling of his Navy days, and listening and dancing (with anyone who would dance with him) to country music. Richard loved traveling and enjoyed Germany, Italy and Singapore on business, but his favorite travel memories are those of numerous trips to Branson, MO and San Diego, CA with his wife, children and grandchildren. Richard is survived by his children, Son’s Richard Nowak, Jr. and wife Jennifer, John Nowak and his wife Dana. Daughter’s Cindy Lee, Sherri Langford and her husband Brad, Carolyn Wolfe, Stephanie Martin and her husband Mike. He is also survived by his 14 grandchildren, Ashlyn Gremillion and her husband Chandler, Kaitlyn Lee, Tyler Nowak, Lauren Wolfe, Riley Nowak, Nick Lee, Jonathan Wolfe, Addie Nowak, Emma Nowak, Luke Nowak, Zoe Nowak, Pedro Martin, Johnny Nowak & Mary Nowak. Richard is preceded in death by his beloved and cherished wife, Sandra Nowak, his son Joseph M. Nowak, his Parents, Edward & Clara Nowak, and his Sister Alice Buckner and her husband David. The family would like to thank Avalon Memory Care for their steadfast support and loving care of Richard. Unfortunately, we lost our Dad to another world years ago, a world in which we were "pretty ladies or good friends" who were there just to visit. Dad was often reliving an earlier time, but we continued to love him the same, and cherished our time with him. The one name he still spoke of at the very end was Sandra Jean. Rest in peace, Dad and give Mom a hug for us. We love you.

Richard Edward Nowak, Sr., 79, died peacefully in his sleep on July 30, 2020. Richard was born in Buffalo, New York on August 17, 1940, to Clara and Edward Nowak and was the youngest of two children. As a family, they moved to Denver and then... View Obituary & Service Information

The family of Richard Nowak created this Life Tributes page to make it easy to share your memories.

Richard Edward Nowak, Sr., 79, died peacefully in his sleep on...

Send flowers to the Nowak family.