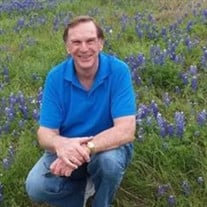 Richard Tully Trenholme, known as Rick, tragically and unexpectedly passed away on September 8, 2021 in Houston, TX, surrounded by his children. Born in October of 1947 in Montreal, Canada, Rick had a zeal for life, making many close friends throughout his various adventures. He moved around quite a bit as a young child, from Montreal to the Okanagan Valley in British Columbia, and ultimately to San Diego, where he graduated from Hoover High School in 1966. Following high school, Rick earned his bachelor’s degree in broadcasting at San Diego State. His high school and college life focused on a passion for “show biz” – stage acting, radio broadcasting, and more. The natural next step was to move to Los Angeles following college, where he worked at Universal Studios for several years. In Los Angeles, Rick and his former wife of 37 years, Lindsey, started a family and raised their three children. Along the way, in an effort to have a better work-life balance, Rick switched careers to the financial services field, where he worked in various capacities until his passing. In 2006, Rick moved to the Houston area with Lindsey to be closer to their eldest son and family. Rick had several passions in life. He was a fan of British sports cars throughout his life and an active participant in local car clubs, most recently the Texas Triumph Register. He excelled at public speaking, winning several awards with local Toastmasters clubs. He kept up to speed on current events and politics, and also enjoyed planning out investment strategies. He loved to travel and explore, sharing his adventures with his friends through detailed social media posts containing plenty of pictures. Much of his domestic travel was for work, which often took him off the beaten path to small town America. He was striving to visit all 50 states, and nearly accomplished his goal, just missing West Virginia, Arkansas, and Vermont. Outside of work, he traveled internationally, with recent trips to Cancun, Costa Rica, and Aruba. His favorite memories were the beautiful beaches of Tahiti, Hawaii, and the Caribbean; cruises on the open sea; the Lake District in England; and exploring the Okanagan Valley in British Columbia and the Canadian Rockies. Rick was preceded in death by his parents Richard and Isabel Trenholme. Rick is survived by his three children (Richard – Spring, TX; Katherine – Alexandria, VA; and Michael – Spokane-WA), six grandchildren (Jonathan, Christopher, Abigail, Eliana, Madison, and Sadilynn), and a new grandchild on the way. Rick was incredibly invested in the lives of his children and grandchildren. He was planning to retire at the end of the year and move to Virginia to spend more time with his daughter and her family, and to continue his travels and adventures. Rick’s life will be celebrated and remembered at the Addison Funeral Home in Spring, TX, on Wednesday September 15. He will be interred in British Columbia at the Oliver Cemetery. There, Rick will be laid to rest in the shade of the mountain alongside his parents and other close family members.

Richard Tully Trenholme, known as Rick, tragically and unexpectedly passed away on September 8, 2021 in Houston, TX, surrounded by his children. Born in October of 1947 in Montreal, Canada, Rick had a zeal for life, making many close friends... View Obituary & Service Information

The family of Rick Trenholme created this Life Tributes page to make it easy to share your memories.

Send flowers to the Trenholme family.