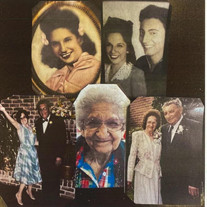 Ritamae Herbert Salinas peacefully passed away on Wednesday, March 25, 2020, in Houston, Texas, at the age of 93. Rita was born February 27, 1927, in New Orleans, Louisiana, to Felicia Avril Herbert and Clarence Richmond Herbert. She was a devout Catholic and never missed praying her rosary everyday. She and Armando attended Assumption Catholic Church for many years. She was preceded in death by her beloved husband, Armando; her parents, Felicia and Clarence Herbert; her sisters, Shirley Herbert Brent and Elaine Herbert Ovella; her brothers; Clarence Henry Herbert and Aubury Anthony Herbert, Sr.; and her son-in-law, Arthur Parker. Rita is survived by her six children, Linda De Leon and husband Rick, Armando Salinas, Jr. and wife Melodie, Yolanda Trump and husband Tom Trump, Maria Parker, Paula Salinas, and David Salinas and wife Shirley; as well as 6 grandchildren, 12 great grandchildren and 2 great, great grandchildren. She is also survived by her siblings: her brother, Milton Emile Herbert, Sr. and her sisters, Betty Herbert McGrady and Mary Herbert Smith, all of New Orleans. Rita graduated from Joseph Kohn (All Girl) High School in New Orleans in 1944. She met her “Prince Charming” Armando Salinas, a Texan, during WWII when his ship was docked in New Orleans for supplies and preparing for its trip to the South Pacific. After the war; they were married on March 15, 1946. They moved to his hometown, Yorktown, Texas, where Rita was received with open arms by the Salinas/Soliz family, who all loved her outgoing, talkative personality. She couldn’t speak Spanish and her mother-in-law couldn’t speak English so, they taught each other to speak the other’s language. Later that year they moved to Houston, Texas where they raised their six children. Rita was a perfectionist and everything she did was perfect down to the last detail. She took cake baking classes to be able to make them for her children and grandchildren’s birthdays, and they were better than any cake you could buy. She learned to crochet at a very young age and made everything from potholders to afghans and baby blankets for her grandbabies. After she and Armando became empty nesters, she helped her son-in-law, Arthur, in his printshop. Some of her grandkids nicknamed her the Little General, especially after she moved in to the Nursing Home where she spent the last 6 years. She ran the place. A Funeral Mass will be celebrated at St. Ignatius Loyola Catholic Community Church, 7810 Cypresswood Dr., Spring, Texas 77379, on Friday, September 25, 2020, at 11:00 a.m. The Reverend Norbert Maduzia, Jr., officiant. Interment will be at Houston National Cemetery, 10410 Veterans Memorial Dr., Houston, TX 77038. The above date is subject to change in light of health concerns. Any changes will be posted to this website. In lieu of flowers please make donations in the name of Ritamae Herbert Salinas to: Alzheimer’s Association 6055 S. Loop E. Fwy. Houston, TX 77087 St. Ignatius Loyola Catholic Church Funeral Liturgies While we are not fully open, we continue to offer the funeral rites for you and your family members. Currently, we have certain measures in place which must be followed for the safety of all who participate. 1. Arrival Procedures: Masks are required before entering and at all times when you are in the church building. Your temperature will be taken, your hands will be sanitized as you enter the narthex, and you will be assisted in finding seats. Social distancing is observed at all times for your safety. 2. Arrival time: For the immediate family: The immediate family is asked to arrive no more than 30 minutes before the scheduled time of the funeral. For the funeral home: The funeral home is asked to arrive no more than 30 minutes before the scheduled time of the funeral. For the extended family and friends: Extended family and friends are invited to arrive no more than 20 minutes before the scheduled time of the funeral. All should be notified that if they have been sick or are in an at-risk group they should not attend. 3. Visitation in the narthex: There is no visitation in the narthex before or after the funeral. As guests arrive, they may greet the immediate family at a distance. They then proceed into the church/chapel from the narthex always maintaining six feet from each group in “pass by” fashion, much like at the end of a funeral home service. 4. Memorial book and remembrances: A memorial book may be set up in the narthex. However, no pen will be out for signing the book. Family members can pass their own pen around or the funeral home can provide one. A signer may use their own pen. There will be no table for photos or mementos available. 5. Seating: Hospitality ministers will direct everyone to their seats. Physical distancing guidelines are followed and roped off areas and signs must be observed. 6. Reception of Holy Communion during the funeral Mass: Communion is distributed in accord with the process as at all Masses at St. Ignatius during the COVID-19 pandemic. The presider will provide instructions prior to the distribution of Holy Communion. Please follow the directions of the hospitality ministers. 7. Dismissal: The immediate family may leave following the casket as it exits. The family is to accompany the casket all the way to the hearse/coach and may not return into the church. All others are seated at the conclusion of the final hymn and hospitality ministers will direct dismissal by section and pew. 8. Bereavement Meal: We are unable to host bereavement meals at this time since the parish has not completely reopened due to the limitations and safety requirements with Covid19.

Ritamae Herbert Salinas peacefully passed away on Wednesday, March 25, 2020, in Houston, Texas, at the age of 93. Rita was born February 27, 1927, in New Orleans, Louisiana, to Felicia Avril Herbert and Clarence Richmond Herbert. She was a... View Obituary & Service Information

The family of Ritamae Herbert Salinas created this Life Tributes page to make it easy to share your memories.

Send flowers to the Salinas family.