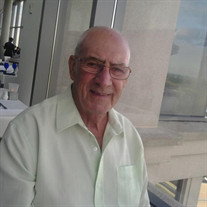 Beloved husband, father, grandfather and great grandfather, Robert “Bob” Dillon passed peacefully into eternal life at the age of 82 on June 9, 2020, in Houston, Texas. Bob is preceded in death by his parents, James Dillon and Josephine (Anderson) Dillon, both of Philadelphia, PA. He is survived by his devoted and loving wife of 58 years, Sally Ann (O’Brien) Dillon, the love of his life, whom he married on May 5, 1962 in Bloomsburg, PA. Bob and Sally had the great joy of raising a large family and he is also survived by their 4 children: daughter Kathleen and husband Michael Demny, of Spring, Tx., son Michael of Houston, Tx., daughter Theresa and husband Phillip Holmes, of Magnolia, Tx., and son Richard and wife Terri (Latimer), of San Antonio, Tx. Bob was also blessed with and is survived by 7 grandchildren: Elizabeth (Demny) Roberts (husband Chance, deceased) of Spring, Tx., Sarah (Demny) Hochman, (husband Devin) of Cleveland, Tx., Robert “Ty” Dillon and Amy Kay Dillon of San Antonio, Tx., Brittany Dillon of Santa Rosa, CA., Matthew Silva and Joseph Silva of Magnolia, Tx., and 3 step grandchildren, Stephen Silva, Nathalia Silva Ball and Meghan Silva Laird, all of Houston, Tx. Bob adored his three great grandchildren, Amelia, Laiden and Hunter. He is further survived by his brother, Joseph Dillon of Leesburg, Fla., (wife Kay, deceased), and sister Patricia and husband Bob Morgan of Philadelphia, PA., along with numerous cousins, nieces and nephews. Bob was born and raised in Philadelphia, PA. attending Catholic school all the way through college, where he studied mathematics at La Salle University. Bob was the fair-haired boy of the nuns in his elementary school as he always waited for them after school to help carry their books back to the convent. They just knew he was destined to become a priest. But God had other plans. While in high school, Bob enlisted in the Navy Air Force Reserve, where he faithfully served his country for 8 years flying P planes. He always said it was the second best decision he ever made. The first was to marry his best friend, Sally. After their second child, Bob and Sally moved their family out to the suburb of Warrington, PA. Raising four children born within four years was no easy task, but that move proved to be one of the best decisions for them. Bob began working for the Telephone Co. of Pennsylvania in 1958 as a lineman and soon became one of their top computer programmers. Despite loving their life in the suburbs, in 1977, he and Sally courageously moved their family cross country to Houston Tx., where he would continue his journey at the phone company with Southwestern Bell. Bob was highly significant in the transfer of SWB from their existing switching system over to computers in the late ‘70s and early ‘80s. Eventually he became president of the much beloved “Pioneers Club” of the SWB Co. and remained in that position for several years. Bob retired in 1992 and continued with his hobbies which were fixing anything needing fixing, building anything needing building, Cross word puzzles, Sudoku and playing golf! He especially loved being able to walk out the front door and right onto the golf course when he and Sally retired to Waller, Tx. Bob was a man of great faith, strength, courage and integrity. He was always seeking knowledge in one way or another and frequently said he wanted to learn at least one new thing every day. These values were taught to his children in many ways. He expected the highest character of his children and would never settle for anything less than their very best in any area. He had many slogans he used to teach these values that have stuck with them all these years. While he was very demanding, he was also very loving. Bob loved to play with his kids when they were young, teaching them how to ice-skate, play ball, sled, play board games and even wrestle. As they got older he would debate politics, religion, or any other topic. Bob was a firm believer in finishing what was started. Never give up. Never quit. He always wanted his children to believe in themselves and exceed even their own imaginations. These teachings and this love for his family carried through to his grandchildren and even his great grandchildren. Bob was a devoted Catholic and served his church as an Extraordinary Minister of Holy Communion. Bob and Sally were very active in their parishes, and back in the ‘70’s became part of a very unique circle of friends through church, who even 40 years later are like family. Rooted in faith and love, Bob and Sally have developed lifelong friendships everywhere they went. Stories of Bob’s life adventures always captivated anyone who was listening. His endless stream of quips and comebacks, always with a laugh, endeared him to so many. He had a nick name for nearly everyone. He would say that meant he liked them. Even the nurses became endeared to Bob, laughing about his feistiness at times. The last two years in nursing homes fighting the advance of Alzheimer’s disease were spent with Sally by his side nearly daily, keeping him company, tending to his needs as best she could, and loving her husband through the insidiousness of the disease. The hardest part was being shut out of the nursing home during the lockdown of the pandemic coronavirus, even having to celebrate their 58th anniversary through the window. Bob leaves behind a great legacy of wonderful memories and never- ending teachable moments. He will be greatly missed as a very loving husband, father, grandfather and great-grandfather. May our God of all glory honor and praise, be with him always and give him eternal peace.

Beloved husband, father, grandfather and great grandfather, Robert &#8220;Bob&#8221; Dillon passed peacefully into eternal life at the age of 82 on June 9, 2020, in Houston, Texas. Bob is preceded in death by his parents, James Dillon and... View Obituary & Service Information

The family of Robert Joseph Dillon created this Life Tributes page to make it easy to share your memories.

Send flowers to the Dillon family.