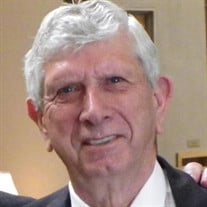 KEMSLEY, ROBERT STEVEN Birth: 31 May 1938 Death: 6 March 2020 On Friday, March 6, 2020, Robert Kemsley, also known as Bob Kemsley, passed away at the age of 81 years at his home in Spring, Texas. Robert will forever be remembered and loved by his wife and best friend, Yvonne Kemsley and their precious children, grandchildren and great-grandchildren. Robert was predeceased by his daughter, Kathryn Kemsley Wilkerson, his sister Georgia Miller, his mother Betty Marie Castle and his father, John Irven Kemsley. There will be a viewing and visitation on Thursday, March 12, 2020 from 6:00 p.m. to 9:00 p.m. at the Addison Funeral Home located at 18630 Kuykendahl Road, Spring, Texas 77379. A funeral service in memory of Robert will be held on Friday, March 13, 2020 at 11:00 a.m. at the Church of Jesus Christ of Latter-day Saints chapel located at 16833 T.C. Jester Boulevard, Spring, Texas 77379 (at the intersection of Louetta and T.C. Jester). Interment will follow at Magnolia Memorial Gardens, 811 S. Magnolia Blvd., Magnolia, Texas 77355. Robert is survived by his wife of 58 years, Yvonne, son Rod, 7 grandchildren including Stephanie Knight with her husband Keenan, Steven Wilkerson, Brittany DesChamps, Brittany Macdonald with her husband Cameron, John Wilkerson, Keisha Warren with her husband Justin and Hailey Yough with her husband Jacob, 9 great-grandchildren including Callum Macdonald, Rory Macdonald, Tayden Warren, Lilah Yough, Rhys Macdonald, Kinley Warren, Avery Yough, Paxton Macdonald and Paisley Warren as well as 9 brothers and sisters including Jack Kemsley, Dixie Paquin, Loretta Kemsley, Linda Shropshire, David Kemsley, Melody Kemsley, Betty Lee Moreland, Jeanine Harper and Joey McGowen. Robert worked as a Superintendent for a General Contractor for most of his career. In his later years, he drove a school bus for Klein Independent School District. Robert was well known for his love and service to others throughout his life and his strong testimony of and faith in the Lord Jesus Christ. Robert is a member of the Church of Jesus Christ of Latter-day Saints where he served in numerous positions including Bishop, High Councilor, Instructor and Building Representative caring for the local chapel. The Addison Family and staff extend their condolences to the Kemsley family.

KEMSLEY, ROBERT STEVEN Birth: 31 May 1938 Death: 6 March 2020 On Friday, March 6, 2020, Robert Kemsley, also known as Bob Kemsley, passed away at the age of 81 years at his home in Spring, Texas. Robert will forever be remembered and loved... View Obituary & Service Information

The family of Robert Kemsley created this Life Tributes page to make it easy to share your memories.

Send flowers to the Kemsley family.