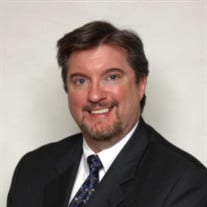 Robert Wendell Lamb, 59, of Cypress, Texas, suddenly passed from his earthly life to his eternal glory with Christ on August 22, 2021. Robert was a loving husband, devoted son, adoring father and Papa, loyal brother, cousin, and friend. He is survived by his wife Kathleen Lamb of Cypress, TX, mother, Helen Lamb of Hammond, IN, sisters Judy Lamb of Whiteland, IN and Patti Lamb of Merrillville, IN, daughter Stephanie Mendez (Frank Mendez) of Humble, TX, grandchildren Katie, Frankie John (FJ), Caroline, Matthew, Jacob, Abby and his sweet dog Darby, the “little gentleman.” Robert was preceded in death by his father, Wendell O. Lamb of Hammond, IN (originally from Wichita Falls, TX) and many other relatives in Indiana and Texas. Robert had a brilliant mind and was the hardest working person anyone ever met. He graduated from the University of Wisconsin as well as Purdue University in Hammond, IN—the city in which he was born. Early in his career, Robert worked for several companies in downtown Chicago which he loved. In 2000, he got a great opportunity to move to Houston, Texas as a Director with AT&T. Robert’s incredible people skills and being a subject matter expert took him all over the globe, including such places as Qatar in the Middle East. Robert was the consummate professional, working 12-14 hours a day. Everyone who worked with him was duly impressed with his stamina and ability to stay on a project as long as needed, working out every potential problem and detail. In 2016, Robert embarked on a new career with CDW. Robert’s motto was “he worked for men as if he were working for God.” (Colossians 3:23) He was a well-respected, indispensable employee for CDW—working there for five years at the time of his passing. Robert was a man of endless talents. He was the consummate musician. He excelled at lead, rhythm and acoustic guitar. He played an awesome bass, mandolin, keyboards, drums, and percussion. He always knew the perfect touch to add to any song, giving it the special “Robert” touch. Because he was such a versatile musician, Robert was always in demand with Houston area praise teams. He often filled in on Sundays at a moment’s notice at places like Fellowship of the Woodlands, Cy-Fair Christian, Creek’s End, and Sawdust Road Baptist Church to name a few. Additionally, Robert and his wife Kathleen led the One Voice prayer service at ChristBridge Fellowship in Tomball, TX for five years. Being a part of corporate worship was really important to Robert. He recently joined Second Baptist Church Cypress Campus and enjoyed being a part of their Bible study class “Foothills.” Volunteering was something Robert was very passionate about and lent a helping hand wherever needed. One such need was Living Water International. In 2014, Robert travelled with a team from Cy-Fair Christian Church to Guatemala, to help dig a well that provided safe drinking water for the local village. Robert also felt strongly about donating blood. For decades, he was a regular blood and plasma donor at Gulf Coast Regional Blood Centers in Houston. Robert also had a real passion for the KSBJ’s radio station prayer ministry. During their annual prayer-a-thons, he volunteered his time at the station, enthusiastically praying for all those in need. As wonderful as all these characteristics and accomplishments are, what Robert loved most in the world was his family. Robert was a loyal and dedicated husband, devoted son, wonderful father, doting Papa, loving brother, cousin, and friend. He was always ready and eager to help whenever there was a need. It didn’t matter how tired he was, if anybody needed him for anything, Robert stepped up and gave his all to help. He truly loved his wife, mother, daughter, sisters, grandchildren, family and friends. Even though Robert was not a biological father, he treated his daughter Stephanie and grandchildren as if they were his own blood. He always said he wanted to model his relationships in the way “Joseph loved Jesus.” Our Robert loved and worshipped Jesus with his whole heart. And Jesus loves him. Robert was such a joy to the Lord. Rest in peace, sweetheart. Until the sound of the shofar!

The family of Robert Wendell Lamb created this Life Tributes page to make it easy to share your memories.

Send flowers to the Lamb family.