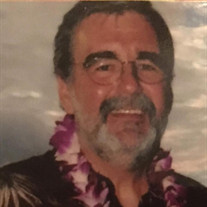 Rodney David Grushkowsky left this world on February 10th, 2022 to join his friends and family in heaven. He began his heavenly journey from his home surrounded by his loving family. He was a faithful husband, father and friend…and truly a gentle giant to all those who knew him. Those missing him the most will be his loving wife Ruth Ann Grushkowsky, who he so happily married on August 26th 2017. Ruth was by his side and incredibly caring of Rodney over the last 8 months of his hospice care. Ruth’s children, Brett Martin, Carrie Black, Steve Martin and their spouses. And Rodney’s only son, Christopher David Grushkowsky, who loved his dad deeply, even when Rodney turned Saturday cartoon mornings into yard work and chores. Chris’ wife Amanda Leigh Grushkowsky, and her daughter Andi Smith. Rodney was born on August 15th 1947 in Frankfurt Germany. Rodney was born again in Christ on October 4, 1975, along with his wife Jeri Eileen Grushkowsky, whom he had married on December 19, 1969. After graduating from UT El Paso in 1972, he accepted an offer with Shell Oil Company and worked in various Marketing positions for the next 30 years before retiring and working with Jeri who managed an in home daycare. Rodney lived in a number of places both because of his and his parents military careers…but also because Rodney was born with a need for the open road and new adventures. He loved long road trips and visiting his favorite spots like Hawaii, Las Vegas, New Orleans and anywhere his kids were. Rodney was in the US Army, which he purposefully enlisted so he could control his military career. He lived in Columbus, GA, Ft. Campbell, KY, Fairbanks AK., El Paso TX., Arlington TX, The Woodlands TX, and Rochester Hills MI. Proceeding Rodney into death are both of his parents, Gideon Grushkowsky, Frances Kabanuk, his brother Dean Grushkowsky, his wife Jeri Grushkowsky, daughter Kymberli Sedgwick and nephew Timothy Grushkowsky. Rodney will be missed…but we know heaven is rejoicing with their newest arrival. A memorial service will be held for Rodney at 11am at Grace Crossing Church on Friday February 25, 2022. The church is located at 105 FM 1488 Conroe, TX (close to the intersection of I-45 and FM 1488). 936-442-5700

Rodney David Grushkowsky left this world on February 10th, 2022 to join his friends and family in heaven. He began his heavenly journey from his home surrounded by his loving family. He was a faithful husband, father and friend&#8230;and truly... View Obituary & Service Information

The family of Rodney Grushkowsky created this Life Tributes page to make it easy to share your memories.

Send flowers to the Grushkowsky family.