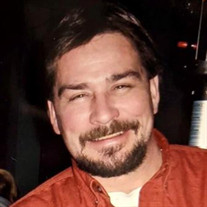 Ronald George Javurek was welcomed to this world on March 30th, 1967, in Prior Lake, Minnesota, First born child of George and Ann Javurek. Growing up so close to his extended family in a small-town area. Ron spent his childhood experiencing all sorts of outdoor activities including but not limited to hunting and fishing. His family often moved around Minnesota and eventually to Wisconsin where he was fortunate to get his first taste of the “Bar Life”. Something that he would dream about and participate in for the rest of his time on Earth. While late nights with buddies having a cold one was something he truly enjoyed and embraced he was able to gain and grow great relationships with people from all walks of life. Making new friends was something that always came easy to him with his wise cracks and funny joking nature. To know him truly was to love him. While we all have our own interests and desires his never ventured far from friends and family trying to make them laugh. As a young adult Ron found himself venturing south to Texas where he would spend the rest of his life starting a family of his own. He worked for many Ford Dealerships around Houston, TX making lifelong friendships and even people he would consider as brothers. He found success as a highly Certified Technician excelling at working on Ford Diesel specifically. Ron and his friends enjoyed things like Camping, Hunting, Fishing, Motorcycles, Island Trips and many lates nights spent at Local bars such as Track Shack and Stadium talking about old memories and experiences, he had in what many would describe as a wild and eventful life. After plenty of years of hands-on experience as well as the many lessons taught to him by his father and other various important figures in his life. He took that information and made sure to pass it on to his Son Nic so he too could find the love and appreciation for the outdoors. As a kid Nic could always be found with his dad at hanging with friends, at the deer lease or out on the boat enjoying water sports or fishing. Ron made sure to pass on everything he knew to son. There was no such thing as spending to much time with his son. On Wednesday, March 2nd, 2022, Ron, age 54 left this earth to join our Lord Jesus Christ and so many friends and family who passed before him. Ron battled his entire life with Diabetes but never let it defeat him or break his spirit. Instead, he spent his entire life living in the moment doing anything and everything possible to enjoy himself and bring laughter to those around him. His mom Ann always said “He was a hell raiser. He lived his life to the fullest every day and he always told her “He had lived a Great Life”.” As a Man of God and believer in Jesus Christ. Ron aspired to be apart of something greater than himself. He devoted a significant amount of time to becoming a Free Mason. Something he was so very proud of as he believed in his brother and found peace in the positive work, they did in his community helping others. One of the most admirable traits of Ron was his ability to help not just his friends, but anyone who needed an extra hand. He was a great man and selfless when it came to doing what he believed was right. Survivors include his Son, Nicholas Javurek of Cypress, TX, his Mother, Ann Javurek of St. Peter, MN, Sister, Tammy Kabus and her husband Matt Kabus of Spring Lake Park, MN, two grandsons Brody & Wyatt Javurek, He is preceded in death by his father George Javurek, his Grandmothers Josie Bartusek and Helen Javurek and his Uncle Ron Bartusek. The family will be holding a Celebration of Life, Saturday March 12, 2022 at The Stadium Bar & Grill from 12:00 PM - 4:00 PM. https://www.thestadiumspring.com/ No services are being held through Addison Funeral Home.

Ronald George Javurek was welcomed to this world on March 30th, 1967, in Prior Lake, Minnesota, First born child of George and Ann Javurek. Growing up so close to his extended family in a small-town area. Ron spent his childhood experiencing... View Obituary & Service Information

The family of Ron Javurek created this Life Tributes page to make it easy to share your memories.

Ronald George Javurek was welcomed to this world on March 30th,...

Send flowers to the Javurek family.