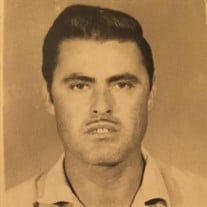 Ruben L. Ojeda was born to the late Enedino and Candelaria Ojeda, a musician and a homemaker, in Durango, Mexico on October 8th, 1935. He was an entrepreneur who owned a public transportation bus and his own route, a career that brought him many adventurous stories to share for years to come. In the mid-1950’s, he traveled to the U.S. seasonally to work in agriculture. In the mid-1970’s, he moved to the U.S. with his wife and children where he worked in construction for 20 years. Ruben was blessed with a large and loving family. He eloped with his wife, Josefina on October 20th, 1960 in Culiacan, Sinaloa. Together, they raised seven children with discipline, humility and generosity. He taught them self-reliance, perseverance and a strong work ethic. He reinforced the importance of embracing their culture and roots with summer trips to Mexico and requiring Spanish be spoken at home. Ruben was a builder and a handyman at heart. He was confident, prideful and resilient. He always found time for home improvement projects and to share ideas on how to repair things. He abundantly shared stories from his past, never leaving out small details like first and last names of the people in his stories. His charm could easily immerse you into hours-long conversations. Ruben was a father, but best skilled as a grandfather. He always had time to take care of his grandkids as they played outside. He always had quarters to spare for the ice cream truck, the paletero and the elotero. Tata, as his grandchildren called him, always found ways to enhance the fun they were having. From make-shift pull carts to basketball hoops there was never an obstacle too big for fun. Tata loved his grandchildren and he shared it proudly. He will be dearly missed by his loved ones. Ruben is survived by his wife, Josefina Ojeda; his sons, Ruben, Enedino, Adolph and Richard; daughters-in-law, Denise, Irma, and Estrella; his daughters, Lupita, Olga and Jackie; his sons-in-law, Carlos and Xavier; his grandchildren Jonathan and his wife Rochelle, Stephanie and her husband Alexander, Josephine, Amrie, Kailey, Sebastian, Samantha, Cassandra, Christopher, Raedine, Megan, Madeleine, Vianey, Lucila, Rebecca, Victor, Samarah, Isaac, Natalie, Elijah, Caleb, Karla, Rafael and Emily; Great-grandchildren- Ethan, Julius and Owen; Brothers, Manuel and Jesus; sisters, Carmen and Lupe. He is preceded in death by his dear grandson, Matthew; brothers, Raul, Filemon, Josemanuel and Pedro; sisters, Delia, Chepina and Carolina.

Ruben L. Ojeda was born to the late Enedino and Candelaria Ojeda, a musician and a homemaker, in Durango, Mexico on October 8th, 1935. He was an entrepreneur who owned a public transportation bus and his own route, a career that brought him... View Obituary & Service Information

The family of Ruben L. Ojeda created this Life Tributes page to make it easy to share your memories.

Ruben L. Ojeda was born to the late Enedino and Candelaria Ojeda,...

Send flowers to the Ojeda family.