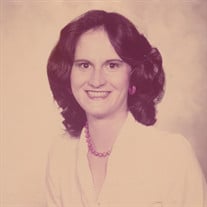 Ruby June King, 67, of Tomball, Texas, passed away Thursday, April 1, 2021. Ruby was born January 24, 1954 to parents Clarice Faye and Fred E Self in Houston, Texas. She attended Tomball High School and graduated class of 1972. On November 15, 1974, Ruby married the love of her life, Willard Ralph King. Between 1976 and 1982, Ruby had 5 children, including 2 sets of twins. While caring for her young family, Ruby decided to continue her education and enrolled at Cameron University in Lawton, Oklahoma in 1989. She went on to earn her diploma from the University of Houston School of Nursing after relocating to Houston, Texas. Ruby enjoyed a 15 year nursing career that was a natural fit for her caring nature. She took great satisfaction in providing excellence of service and dignity for her patients. She also had an artistic side and dabbled in many expressive arts including jewelry, crafts, crochet, and sewing. She often made outfits for her children and herself. She was an excellent cook who looked forward to family get-togethers where she could create a meal for her loved ones. The holidays were her favorite time of the year when she could gather all of her family under one roof. She had a love for children and was called “second mom” by many of her children’s friends. She cared deeply for her grandchildren and could not wait to meet the newest addition to the family, baby A.J. Ruby is preceded in death by her parents, Clarice and Fred, and her youngest brother, James Kevin Self. She is survived by her loving husband Willard Ralph King, her siblings Rachel Kriner and husband Tim, Kenneth Self and wife Margaret, and sister-in-law Maria Anastasio Richard and husband Robert. Also by her children, daughter Denise Dianne Malone and husband Christopher, son Jason Ray King and partner Richard Bloom, daughter Jeanine Faye King, son Christopher Wade King and fiancee Andrea, daughter Christine Eileen King and husband Tim Long, stepdaughter Kimberly Katherine Marshall and husband Thomas Pixton, and stepson Lawrence Dean King. She has three loving grandchildren, Kara Lynn King, Isaak Pierce Gonzales, and Aaron Jason Long. Honorary Pallbearers: Chris K., Chris M., Isaak, Jason, Richard, and Kyle Pastor Andrew Soerens officiating.

The family of Ruby June King created this Life Tributes page to make it easy to share your memories.

Send flowers to the King family.