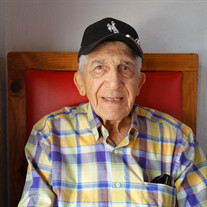 Sam A. Lapaglia went to be with the Lord on August 8, 2020, at the celebrated age of 91 years! He was born on February 7, 1929 in Eloise, TX, to Tony G. Lapaglia and Rosalia Margiotta Lapaglia. He was child number 6 of 13. During the depression times were hard so he only finished the 4th grade, and at 9 years old, he helped take care of his family by working on the farm and picking cotton. His older brothers had to go to the war, so he and his two older sisters took care of most chores, and also their younger siblings. Some family had moved to Houston and convinced them to leave the country to find work in the city. His older brother Carsdonia worked for American Can Co. and Sam went to work there and had a very full 33 year career. Most of his family lived close by in N. Houston. It was there that he met the love of his life, Billie Ann Morgan. They married and had one child, Sheila Ann. He and Billie were very happily married, and were members of Cochran Street Baptist Church. They made life-long friends that were like family. Sam wanted his daughter to learn the piano, so she started lessons when she was 6 and played for the church for many years. Sam was loved by everyone and went out of his way to help anyone. But there were also numerous stories of Sam playing phone tricks on people. He would answer the phone and alter his voice into a deeper one with a different accent, and ask them if they were calling about the horse he had for sale, or some other lark that would confuse people and make them say they had the wrong number and hang up. After a couple of call backs, he would start laughing and they said they would get him back! He was always helping stranded motorists on the side of the road, and Billie would get upset as she and Sheila would be stuck in the car for hours. He worked on their family and friend’s cars while also working at the American Can. He was a Master Mason for 56+ years and a member of the Cade Rothwell Masonic Lodge #1151, Woodland Masonic Lodge #1157 and for 55 years at the Aldine Chapter of the Eastern Star #1088. Sam and Billie enjoyed each other and were happy until cancer took Billie’s life in 1990. Sam was overwhelmed with her passing, and he never was the same. He married Hilda Close until cancer took her life in 2017. Since then he has lived with his daughter in Spring TX. After Sam moved in with Sheila, they became members of First Baptist Church of North Houston and loved their church family and their Pastor, Bro. Mike Westbury. There was a birthday party there to celebrate when he turned 90, and he was so excited and appreciative to see everyone. Recently due to several illnesses, he hadn’t been able to attend church especially since the CoV Pandemic. He had been sick and in and out of the hospital for a few weeks and although he fought hard, he was unable to recover and regain his strength. Sam Lapaglia is preceded in death by his first and second wives; his Parents; Brothers Carsdonia, Tony, Joe and baby William; Sisters Mary Ann Feltner and Dora Fetters; many of their Spouses; Brother and Sister-in-Laws; Nieces and Nephews- too many to list. He is survived by his only daughter Sheila Ann Lapaglia and his grandson Jeremy Samuel Vickery; his 5 remaining Brothers and 1 Sister and their families. There will be a Visitation and Viewing at Addison Funeral Home at 18630 Kuykendahl Rd. in Spring from 6:00 to 8:00 p.m. on Thursday, August 13 and the Funeral Service will be held there on Friday, August 14 at 12:00 p.m. with the burial to follow at Brookside Funeral Home at 2:30 p.m. Please wear your mask! We wish to thank the wonderful staff at Harris Co. Health House Call Program/UT Health for taking excellent care of Sam for 6 years; his Caretaker Mary Brown; the Staff at Sarah Care Senior Day Care, where he thought he was working for them  (for Alzheimer’s); Grace Care of Tomball; and Reliant at Home Hospice. Their combined support and care made it possible for Sam to have more time with Sheila while allowing her to continue her career at ExxonMobil. Thanks to everyone for your love for Sam! Due to COVID 19 restrictions, the burial for Sam Lapaglia will be by invite only. Pallbearers; Chris Allen, Steve Duffy, Carsadonia Lapaglia, Ronnie Morgan, Randy Spann, Ryan Spann, Kenneth Sugg, David Wall

Sam A. Lapaglia went to be with the Lord on August 8, 2020, at the celebrated age of 91 years! He was born on February 7, 1929 in Eloise, TX, to Tony G. Lapaglia and Rosalia Margiotta Lapaglia. He was child number 6 of 13. During the depression... View Obituary & Service Information

The family of Sam Lapaglia created this Life Tributes page to make it easy to share your memories.

Send flowers to the Lapaglia family.