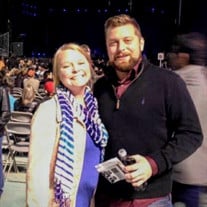 Sean Michael De Spain was born in Baytown, Texas on May 12, 1979 and went to be with the Lord the morning of March 7, 2020. He is survived by his wife Leah, his daughter Charlise De Spain, his father Roger De Spain and his Stepmother Mary Kay De Spain, his Mother Joy Caroselli and her husband Bubba Munsch, his half-brothers John and James De Spain, half-brothers Tyler and Kyle Kunz, his dogs Leroy and Lucy, his rescue goat TomTom, in addition to numerous in-laws, extended family, and long-time friends. He was preceded in death by his grandparents Thomas (TJ) and JoAnn Despain and Tom and Carolyn Bolan and his mother-in-law Mary Anne Dierking. Anyone who met Sean and was asked to describe him in a few terms or phrases it would be said that he was a passionately creative chef, he was kind to strangers to a fault (and generally never met a stranger) and he had an amazing sense of humor and love of telling jokes. If he wasn’t trying to cook some new dish for you to try (usually exotic or parts of an animal you didn’t even know you could eat) or giving you the shirt off his back, then he was trying to make you laugh. His kindness to strangers, or the fact that he literally never met a stranger was one of the most extraordinary things about Sean. He would give anyone the shirt off his back or run out into traffic to help someone push a broken-down car without skipping a beat. On countless occasions he would give his own belongings to the wait staff at restaurants he worked at if he found out they only had one nice shirt to wait tables with or if their shoes were worn out. If he could help someone out by giving them something he had (no matter how big or small), it was theirs. No hesitation and no questions asked. This kindness to strangers extended into his love of animals, particularly dogs. At one point a few years ago his love and want to care for animals ended up with Sean and his wife having a rescue parakeet, a rescue pygmy goat, 2 stray puppies he found wandering the neighborhood in addition to the 3 dogs he already owned. In the winter he would make sure there were makeshift shelters with food and blankets outside on the porch for neighborhood stray cats to stay warm. His latest favorite pastime with his little pug Leroy began this last Christmas when he taught Leroy how to fetch a tennis ball. This turned into every morning Leroy would bring Sean the tennis ball first thing before Leroy even wanted breakfast. It made Sean so happy, loving animals (especially his dogs) brought so much comfort to him. Music was a major source of comfort for him and he had recently started collecting vinyl records again. As a child he would seek comfort in music when he was upset or going through tough times. His favorites as a child to listen to when he was upset were The Tokens, “The Lion Sleeps Tonight”, and anything from Dire Straits and Carlos Santana. Sean was also not afraid to sing loudly in public or in the morning to wake the house up at the crack of dawn which usually consisted of a rendition of “Good Morning” from the musical Singing in the Rain. This habit of singing in public definitely contributed to the fact that Sean never met a stranger and loved putting smiles on people’s faces he met. His passion for cooking came naturally from his grandmother Carolyn and he loved passing down his cooking knowledge and kitchen tricks to anyone that would listen. His last cooking adventure over the holidays involved learning how to make a few Moroccan dishes with his new red clay Tagine he got for Christmas, and like always his first attempt at a recipe was exceptional. It was Chicken Tagine Mchermel. In lieu of flowers, the family asks for donations be made in Sean’s name to Nora’s Home in Houston, Texas. Nora’s Home is a non-profit residential facility offering transplant patients and their families an affordable, home-like environment in the Medical Center of Houston, Texas during treatment. It was founded in 1998 by Doctors Osama and Lillian Gaber in memory of their daughter Nora, who after her death was able to provide life to several critically ill children waiting for transplants. Sean was an advocate for transplantation research ever since his wife Leah received her life saving transplant in Houston in 2015. Donations can be directed to Nora’s Home in Sean’s name through the following information: www.norashome.org or by calling directly at 832-831-3720, [email protected]

Sean Michael De Spain was born in Baytown, Texas on May 12, 1979 and went to be with the Lord the morning of March 7, 2020. He is survived by his wife Leah, his daughter Charlise De Spain, his father Roger De Spain and his Stepmother Mary Kay... View Obituary & Service Information

The family of Sean Michael De Spain created this Life Tributes page to make it easy to share your memories.