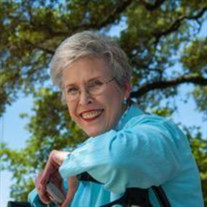 Sherron Elizabeth Bean Hardy, whose radiant positivity and sense of fun brightened the lives of those around her, passed away in The Woodlands on December 16, 2020 at age 78. Whip smart and lovely, with an amazing and sly sense of humor, she had a smile that lit up a room. Born in Houston, Sherron grew up in Mobile, Alabama and graduated from Murphy High School. As a child she loved climbing trees with her sister Joyce and brother Rick. She attended Auburn University. Shortly thereafter she met and married her husband Lyman Hardy, Jr. They shared 38 years together until Lyman’s passing in 2002. During her career, she worked with her husband at Hardy and Associates, an engineering consulting firm, and in office administration at the Federal Reserve in Atlanta and the Australian Consulate in Houston, among others. An amateur photographer and accomplished pianist, she loved to play Beethoven’s Sonata Pathétique. She was an avid swimmer and a competitive tennis player known on the court for her formidable serve. Sherron was also a lifelong computer and technology whiz, and a superbly witty writer who favored the Oxford comma. Sherron enjoyed mystery novels, elephants, museums, Texas history, politics, roadtrips and precious gems. Innately curious and convivial, she had a talent for engaging people and drawing out their best selves. Her intrinsic kindness, sincerity, grace and generosity eclipsed her shyness, and she was able to strike up a conversation with most anyone she met. Sherron was a longtime member of the NW Forest Republican Women of Houston. She and her husband Lyman played a pivotal role in voter registration for George H.W. Bush’s presidential campaign. Sherron is survived by her beloved Shih-Poo, Charlie; her sons, Lyman Hardy III (Allison) of Austin; Michael Hardy (JoAnna); grandson Grayson Hardy of Magnolia; sister Joyce Lyle (Fred) of Mobile, brother Rick Bean (Janet) of Charlotte; sister Karen Johns (Tracy) of Birmingham; extended family and friendships that span the decades she called Houston home. She was preceded in death by her husband, Lyman Hardy, Jr. and her parents Frances Smith Bean and Richard Sherwood Bean, Sr. In lieu of flowers, donations may be made to the Rheumatoid Arthritis Foundation/Help Fight RA, 8815 Conroy Windermere Rd. Suite 309, Orlando, FL 32835.

Sherron Elizabeth Bean Hardy, whose radiant positivity and sense of fun brightened the lives of those around her, passed away in The Woodlands on December 16, 2020 at age 78. Whip smart and lovely, with an amazing and sly sense of humor, she... View Obituary & Service Information

The family of Sherron Elizabeth Hardy created this Life Tributes page to make it easy to share your memories.

Send flowers to the Hardy family.