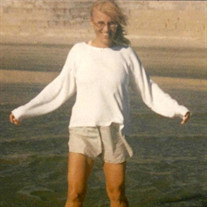 Shirley Ann Horan was a loving mother, grandmother, sister, partner, and a great friend to many. Free spirited and wild at heart, she led an active and adventurous life. Shirley always had a sparkle in her eyes and the most beautiful smile that was almost mysterious, even when times were tough. She was surrounded by close family when, on November 18, 2021, at age 77, her spirit was peacefully set free. Shirley was born to Joseph and Mildred Gaudino on December 10, 1943, in Fort Knox, Kentucky. After graduating from Drake University, she received a master's degree in Psychology from the University of Houston. She married Michael Horan and had two children: Haley and Damian, to whom she was the best mom in the world. With Michael she helped create a series of restaurants, including Birraporetti’s. In addition to being a full-time mother, Shirley was a dedicated educator. For years she worked closely with at-risk teens and helped shape the lives of many. She was twice HISD teacher of the year at Harper Alternative School. Shirley had a great love for nature and beauty which was evident in her gardening and landscaping. In short, she always had the most beautiful flowers on the block. This led to her second career as co-founder of Houston Green, a company that provided landscaping services and magnificent floral arrangements. Always full of energy, Shirley was an avid swimmer, tennis player (with a killer slice forehand), fisherwoman (especially big redfish), and golfer. She had a lifelong passion for photography, resulting in numerous awards as she travelled the world with her long-time-partner Craig Phillips documenting the flora and fauna she loved so much. Without effort, she always brought the rare combination of being the most beautiful and kindest hearted person in the room. Shirley will live on in the hearts of her daughter Haley Horan, her husband Luigi and their son Giacomo; son Damian Horan, his wife Emily and their sons Hudson and Townes; partner Craig Phillips; sister Antoinette Miller and her husband Gary; niece Pandora Gaudino and her daughter Jazmine; brother-in-law Charles Ferguson; other members of the Horan, Gaudino, and Phillips families; and so many whose lives she touched. They will remember her in a deep breath of tropical ginger by the sea, sand dollars washed ashore, jacarandas in full glorious bloom, laughing children, and acts of unconditional love. Shirley joins her beloved parents Joseph & Mildred Gaudino and sister Suzanne Gaudino who went before her. A Remembrance is scheduled for Tuesday November 23rd from 3-5pm at Champions Golf Club. In lieu of flowers, memorial donations may be made to DePelchin Children’s Center or the Alzheimer's Association.

Shirley Ann Horan was a loving mother, grandmother, sister, partner, and a great friend to many. Free spirited and wild at heart, she led an active and adventurous life. Shirley always had a sparkle in her eyes and the most beautiful smile that... View Obituary & Service Information

The family of Shirley Ann Horan created this Life Tributes page to make it easy to share your memories.

Send flowers to the Horan family.