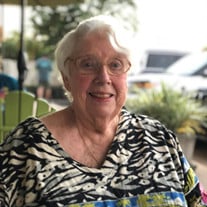 Shirley passed peacefully on Tuesday, 14 June 2022 in her 92nd year. Shirley was born in North Bay, Ontario. She was the daughter of the late Percy and May (White) Norman, and stepdaughter to Alec Allen. Wife of Lee Larson. Loving mother of Mary of Spring, TX; and Anne (Vincent) of Washington, DC. Proud grandmother of Dayton, Thor, and Elektra. Shirley was predeceased by her siblings Harold and Carmen Norman, and Audrey Johnson. A highly competitive sportswoman, she played basketball on the senior high school team as a freshman, competed in North Bay in speed skating and curling, golfed, bowled, and as a young girl was often asked to lead her friends down the ski hill so they could follow her tracks. She pursued her nursing degree and RN at the Toronto East General Hospital, graduating in 1951 and pursuing public health nursing. She joined a friend from school in applying to work in Bermuda where she was the Nursing Manager at the King Edward VII Memorial Hospital in Hamilton. Shirley loved Bermuda where she had many friends, golfed, rode mopeds, and walked on the Atlantic Ocean floor using a diving bell. Ultimately she didn’t like bossing her friends around at work and returned to Canada. In the early 60s she met a dashing engineer who persuaded her to marry and move to the United States. While Shirley did not continue her nursing career she did quickly have her hands full as a mother of two active girls, and became a card shark at Bridge earning her Masters. Shirley took a very matter-of-fact approach to challenges, which was likely a great trait as an emergency room nurse and a mother; or for instance when she woke up in the middle of the night and there was a bear prowling around the campground while the family was snug under their Hudson Bay Company Blankets in the pop-up trailer. She just calmly told everyone about it in the morning...because what were we even going to do? She was known for her holiday baking. She made fudge and multiple cookies, but it was the fruitcake that was in high demand among the bridge set and their husbands, likely due to the weeks of dousing it with a bottle or more of bourbon. She regularly baked cookies which Anne & Mary shared with friends. Interment will be at Forest Lawn Cemetery, North Bay, Ontario at a later date. In lieu of flowers, the family requests you consider a charitable donation in Shirley’s name, to the organization of your choice or one of the below: One Tree Planted www.onetreeplanted.org/products/gift-trees Canadian Nurses Foundation www.cnf-fiic.ca Shriners Hospitals lovetotherescue.org/memorial-gifts/

Shirley passed peacefully on Tuesday, 14 June 2022 in her 92nd year. Shirley was born in North Bay, Ontario. She was the daughter of the late Percy and May (White) Norman, and stepdaughter to Alec Allen. Wife of Lee Larson. Loving mother of... View Obituary & Service Information

The family of Shirley Elizabeth (Norman) Larson created this Life Tributes page to make it easy to share your memories.

Send flowers to the Larson family.