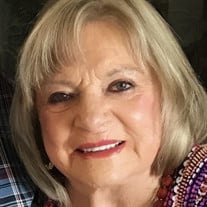 Shirley Hobbs Oliver, loyal and loving wife of Terrence A. Oliver, mother, grandmother, and friend entered her eternal rest on February 20th, 2022 where she was reunited with her son Terrence “Terry” Oliver Jr. and daughter Sherry Oliver. Shirley Oliver was born on May 4th,1929 to Wilson and Cecelia Hobbs in Proctor, Vermont. She had such fond memories of growing up in Vermont and spoke of it often, including her talent of ice skating and how beautiful it was when the seasons changed. Throughout her life, she always kept Vermont in her heart. Her family later moved to Columbus, Mississippi when she was a teenager. In Columbus, Mississippi she met the love of her life, Terrence “Rency” Oliver in 1944 while he was serving in the US Air Force. She frequently recalled that from the first moment she saw him, she thought he was the most handsome man in the world. They were married on July 21st, 1945. Their marriage was a true love story, and they would go on to share 76 wonderful years together. After being honorably discharged from the military, Rency began working for Texaco. They settled in Louisiana and started a family. The Olivers had three wonderful children in Houma where they also made lifelong friends that she remained in contact with throughout her entire life. Eventually they moved to Gretna, Louisiana around 1972 and remained there for over 40 years. Her children were the center of her universe, and she was a devoted mother and an exceptional homemaker. Over the years, she was continuously involved in all her children’s activities and everyone who knew her always remarked on how she always kept her home spotless. In her pastime, she loved to play bridge and belonged to several social groups. She was a member of the Timberlane Country Club, where she frequented often with her children and grandchildren. Together the Olivers enjoyed dining in local restaurants and became loyal patrons at many New Orleans establishments. Shirley was known for her love of life, spontaneous nature and how much she enjoyed entertaining people in her home. Over the years, she attended many parties, galas, sporting events and other festivities in New Orleans and other areas. She loved to travel with her family and enjoyed their annual trips to Florida. Shirley lived her life through her strong belief that family is the foundation for everything, and her belief to put others first. We will remember Shirley for her loving nature, her playfulness, and her remarkable sense of humor. She loved music and was frequently found singing her favorite tune and dancing. She was full of life and everyone who met her instantly fell in love with her. Shirley was said to have never met a stranger. She was the best at striking up a conversation with anyone. She was immensely proud of her children, grandchildren and great-grandchildren and doted on them frequently. She never forgot a birthday and would make sure to call each person and sing them “Happy Birthday.” Shirley was loved and respected by all. She was preceded in death by her parents, her brothers Kenneth and Stanley, her sisters Doris Ryder, Marilyn McConathy and Lydia Hobbs, her son Terrence “Terry” Oliver Jr. and daughter Sherry Oliver. She is survived by her husband of 76 years, Terrence “Rency” Oliver, daughter Dana Oliver Dale and husband, Jim Dale. She is also survived by Jan LeGrand Oliver (wife of Terry Oliver,) grandchildren Jaime Harson Long (husband Sparky,) Stacy Harson Palermo (husband Joseph,) Ryan Oliver (wife Taylor,) Aaron Oliver (wife April,) Colin Oliver, William Dale, Matthew Dale, 7 great grandchildren and several nieces and nephews. Having 92 glorious years before going on to be with the Lord, Shirley had a long and full life. She will be missed dearly but will live on through the legacy of her family. We are so grateful for the time we had to spend with her and we will always feel her presence in our hearts. A celebration of Shirley’s life will be held on Monday March 14th at 2PM in the Addison Funeral Home Chapel (Located at 18630 Kuykendahl Rd, Spring, TX 77379).

Shirley Hobbs Oliver, loyal and loving wife of Terrence A. Oliver, mother, grandmother, and friend entered her eternal rest on February 20th, 2022 where she was reunited with her son Terrence &#8220;Terry&#8221; Oliver Jr. and daughter Sherry... View Obituary & Service Information

The family of Shirley Oliver created this Life Tributes page to make it easy to share your memories.

Send flowers to the Oliver family.