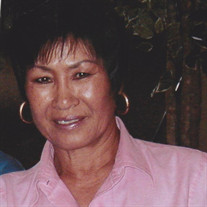 Suni Yun Scott, age 74, beloved wife of the late Jack C. Scott, and a resident of Tomball, Texas, passed away peacefully on June 17, 2021 after enduring a ten-year battle with lung cancer. Suni, who was Korean-born and raised in Noonsan, South Korea, lived most of her adult life in Bullard, Texas. Suni immigrated to the United States in her early twenties to pursue the American dream, and to raise her family in the land of opportunity. Before settling in Texas, she lived in many different states acquiring vast knowledge and familiarity with American cultures and customs. Suni was the mother of two wonderful children, Lynn and Martin (“Marty”). As a mom and housewife, she thoroughly enjoyed an active lifestyle, as she and Jack bowled in couples leagues, entered competitive golf tournaments, enjoyed cruise and casino resort vacations, and would often visit her family back in South Korea. A special gift from Jack, her custom painted white and maroon Corvette, was one of her prized possessions. In Suni’s later years, she and Jack enjoyed traveling in their Class A motor home with their Shitsu, named Eponee (a.k.a. “Hot Dog”). On their cross-country adventures, they enjoyed witnessing first-hand the beauty and diversity of America. When not traveling with Jack, Suni was with her other true loves—her grandchildren. She showered them with gifts, experiences, and her knowledge of the world. She loved family gatherings, and she especially enjoyed watching her grandchildren play with one another for hours on end. Suni will be forever remembered in everyone’s hearts as a great daughter, wife, mother, mother-in-law, MiMi, and friend. For the last six months of her life, Suni lived in Spring, Texas at the New Haven Memory Care facility. Our family extends special thanks to the staff for the quality care and support everyone extended to her during her brief stay. She was predeceased by her husband, Jack C. Scott, her mother and father, Kim Jebun and Yoon Dongsu. She is survived by four siblings: a younger brother, Wan Ki Yoon, and three sisters, Youn Ja Yoon, Sam Ja Yoon, and Hyun Ye Yoon, who all reside in various parts of South Korea; her son, Martin Davis and his wife, Wendy; her daughter, Lynn Cousté and her husband, Leon; and her five grandchildren, Jack Lange, Emma Davis, Noah Davis, Hannah Davis, and Max Cousté. Relatives and friends are invited to attend the visitation and memorial services, which will be celebrated at Addison Funeral Home, 18630 Kuykendahl Road, Spring, Texas 77379, on Thursday, June 24, 2021, at 10 am to 12pm. In lieu of flowers, the family asks that you make a donation to the MD Anderson Cancer Center. The doctors at MD Anderson managed to lengthen Suni’s life an additional ten years! The family will be forever grateful to MD Anderson and it’s staff for those added years. The Addison family and staff of Addison Funeral Home extend our condolences to Suni's family and friends during this difficult time.

Suni Yun Scott, age 74, beloved wife of the late Jack C. Scott, and a resident of Tomball, Texas, passed away peacefully on June 17, 2021 after enduring a ten-year battle with lung cancer. Suni, who was Korean-born and raised in Noonsan, South... View Obituary & Service Information

The family of Suni Yun Scott created this Life Tributes page to make it easy to share your memories.

Send flowers to the Scott family.