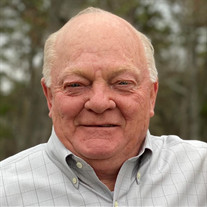 Thomas Robert Rogers passed from this earth in the early morning on December 26, 2020 in The Woodlands, Texas at the age of 64. We find comfort knowing that he is resting in the arms of our Savior. Tom was born on February 17, 1956 to BettyLane and Dick Rogers in Perry, Oklahoma. He graduated from Ponca City High School in 1974 and went on to Oklahoma State University pledging membership to the Sigma Nu Fraternity. He later went on to finish his Bachelor's degree at Dallas Baptist University. Tom pledged brotherhood to the 32nd degree Masonic Lodge in Guthrie, Oklahoma in 1984. Tom married Krista, the love of his life, on June 21st, 1986. They had two daughters, Brooke and Jennifer. Tom had a successful career in the oil field industry living many places across the world where he met many friends he would always consider family. Tom never met a stranger and embodied the true meaning of “giving someone the shirt off your back.” He loved playing golf, fishing in Alaska, attending Oklahoma State football games, being on the lake, spending time with his family, playing with his grandkids, working on his 1956 T-bird, and living life to the fullest every single day. He was an active member at The Woodlands United Methodist Church. He loved Jesus, his family, his friends, and his country and he will be missed dearly. Tom is survived by his loving wife, Krista; his oldest daughter Brooke and husband Chris Reyes, and grandchildren Kaylie, Ella, and Luke; his youngest daughter Jenn and husband Jason Shaver; sister Diana and Mark Miller, sister Shelley and husband Tom Bennett; brother, Sam LeRibeus; as well as many other cousins, nieces, nephews, and cherished family members and friends. He is preceded in death by his mother, BettyLane Rogers; father, Dick Rogers; and step-mother, Nikki Rogers; brother, Chuck LeRibeus, grandparents, Orvil and Eunice Siler; grandparents Brownie and Grace Rogers; and uncle, Jack Rogers. Dr. Lee A. Brewer will officiate the services. All are welcome to attend and celebrate our beloved Tom. In lieu of flowers, the family asks that donations be made to the Texas Scottish Rite Hospital for Children at 2222 Welborn Street, Dallas, Texas 75219. The family would like to express our gratitude to Addison Funeral Home for their care during this most difficult time.

Thomas Robert Rogers passed from this earth in the early morning on December 26, 2020 in The Woodlands, Texas at the age of 64. We find comfort knowing that he is resting in the arms of our Savior. Tom was born on February 17, 1956 to BettyLane... View Obituary & Service Information

The family of Thomas Robert Rogers created this Life Tributes page to make it easy to share your memories.

Thomas Robert Rogers passed from this earth in the early morning...