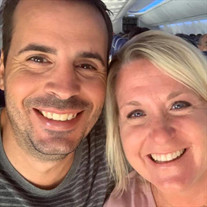 Travis John Hall was called home to his Lord March 7, 2021 at the age of 42. Travis is survived by his mom, Dottie Hall; his wife, Hillary Hall; their children Colby, Zoey, Maryn and Paxton; his brother Mike Hall Jr. and his wife Joanna; his brother Tony Hall and his wife Priscilla. He is preceded in death by his dad, Mike Hall Sr. Travis was born on April 29th, 1978 in Dayton, OH to Mike and Dottie Hall. He graduated from Round Rock High School in 1997. After high school Travis played basketball for St. Edwards University in Austin while earning a bachelor of arts in kinesiology. After graduating from college Travis became a teacher and coach for middle school ladies basketball. While coaching Travis was offered an opportunity in the tech field where he found his professional calling as a talented customer success leader. Travis and Marisa Marisco welcomed their daughter, Maryn Hall on April 5th, 2010. Maryn was the center of Travis' life from that day forward. He married “his person”, Hillary Norris, September 15, 2018. Travis and Hillary were inseparable whether it was golfing, dancing, grilling, traveling, you name it. Travis was so happy to gain three more daughters, Colby, Zoey, and Paxton. They all lived in Spring, TX. Travis was always ready for adventures and teaching lessons along the way with his daughters. He was ready to show how to fix things, go fishing, drive a car or tell a funny tale. He was very proud of his daughters, always sharing videos and pictures of whatever activity or achievement they had just accomplished. He was an excellent father and husband. Travis was a talented athlete and was on scholarship while playing basketball in college. He was a witty storyteller who loved to talk with anyone. He was known for calling the many people he regularly stayed in touch with while he drove his truck. It was said that Travis didn't know how to drive unless he was on the phone with someone. Above all, people remember Travis for how he connected with them. Always quick to brighten anyone's day, he left people feeling happy after interacting with him. He was full of love and shared that love with the world. There will be a celebration of his life on April 24th at First United Methodist Church in Round Rock. All are welcome to attend and celebrate Travis' life. In lieu of flowers, please send donations to American Foundation for Suicide Prevention at https://afsp.org/

Travis John Hall was called home to his Lord March 7, 2021 at the age of 42. Travis is survived by his mom, Dottie Hall; his wife, Hillary Hall; their children Colby, Zoey, Maryn and Paxton; his brother Mike Hall Jr. and his wife Joanna; his... View Obituary & Service Information

The family of Travis John Hall created this Life Tributes page to make it easy to share your memories.

Send flowers to the Hall family.