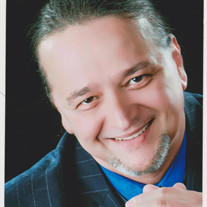 Having made all the right choices in Heaven, Darrel began his earthly adventure on September 24, 1966, as the first-born child of his proud parents Neena and David Thorn. He was happily welcomed home by his heavenly Father on July 16, 2021, but it was what happened during the “dash” of 54 years that endeared him to his wife, family, and friends. As the big brother to his siblings, Jerry (Bo), David, and Carrie, Darrel quickly learned the meaning of responsibility, as he faithfully did his best to help his parents love and care for everyone. Darrel was a nurturer throughout his life as he also raised six children, many times all alone. Most recently he enjoyed spoiling five grandchildren. Darrel was always a good provider and excellent father as he worked hard to care for his family. He delighted to serve others and would bend over backward to help anyone in need. He loved to help others and gave freely of his time and self. He was gentle, tender, and kind, but he also loved to laugh. He was playful and fun to be around. Darrel and his wife, Kathy Lynn, graduated together from Westfield High School in the Class of 1985. They lost touch with one another but reconnected again when they were both servers at the Red Lobster on FM 1960 at I-45. They got married on April 1, 2013, and both felt they had at last found their soul mate. Darrel often told Kathy that she was an answer to his prayers- that he had prayed to find someone just like her. He truly put her on a pedestal, and she loved being there. Throughout his 54 years, Darrel’s life took many turns. He served in the U.S. Air Force as an airplane mechanic. He was a true flag waver and loved America, the beautiful. After his honorable discharge, for several years he was an entrepreneur with his own lawn service business until he became very ill and needed quadruple bypass surgery. His poor health ended that successful venture. Darrell loved to ear. He never met a food he didn’t like, but Chinese was his favorite. He was also a die-hard Cowboys’ fan and bled blue. Darrel was a very private person, and he was loyal, faithful, honest, tenderhearted, warm, and caring. Amidst his busy life, he earned a master welder certification. Darrel was brilliant since he could fix anything and everything. Truly, he was a real man among men. Darrel was not a highly religious person, but he loved Jesus and often spoke lovingly of Him. He believed in the power of prayer and spoke of all the blessings he enjoyed from God. For the last three and a half years of his life, Darrel and Kathy embarked on another adventure. Kathy was the pilot and Darrel rode shotgun for their company, Captain Kathy and Crew. They were a highly successful long-haul team, moving freight for Prime Trucking Company headquarters in Springfield, MO. Kathy wonders how she will go on without her navigator, mechanic, and best friend. It must have been true love as they managed not to kill each other with the two of them. Darrel’s fur baby Rozanne, Kathy’s dog Jelly, and their cat, Cotton, all living together in the close quarters of a semi-truck! Darrel’s dream was to live by the water one day. The ocean was his happy spot. Kathy won’t be surprised to find the castle he is building for her for eternity to be beside a Heavenly Lake. Darrell was preceded in death by this father, David. He is survived by his wife, Kathy Lynn, his mother Neena and his step-father, Mark; his brothers Jerry, David, Anthony and his sister Carrie; his children, Stephanie, Ashley, Justin, Victor, and Savannah; and his grandchildren, Cameron, Alexis, Aleah, Madeleine, and Dexter; and numerous aunts, uncles, and cousins.

Having made all the right choices in Heaven, Darrel began his earthly adventure on September 24, 1966, as the first-born child of his proud parents Neena and David Thorn. He was happily welcomed home by his heavenly Father on July 16, 2021,... View Obituary & Service Information

The family of Victor Darrel Thorn created this Life Tributes page to make it easy to share your memories.

Having made all the right choices in Heaven, Darrel began his...

Send flowers to the Thorn family.