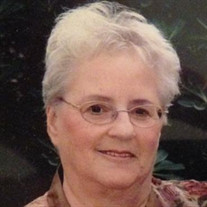 Vonnie Jo Pecht Adair was born October 25, 1931 in Houston, Texas to Edrnund Frank Pecht and Josoie Schuller Pecht, (who both predeceased her). She was a triplet to brothers, Vernon and Virgil Pecht. All six of her brothers predeceased her: Jack, Leroy, S.L, C.J., Virgil and Vernon and grandson Blake. She was baptized into the Christian faith (Lutheran) on the day of her birth (at home) and was confirmed into Northside Lutheran Church, Houston, Texas in April, 1945. Vonnie graduated from Jeff Davis High School. She became the bride of Billy D. Adair on December 19th, 1953, who survives her. She is survived also by her children and their spouses, Cindi, Kim (Pete), Andy (Danielle), Randy, Adam and aaron. AIso to mourn her passing are her beloved grandchildren, Ryan Bryan, Austin, Caleb, Ariel, Ethan, Kailey, Kaleb and Avery. Step grandchildren, Pete Jr., David and Larry. Great Granddaughters Abby and Megan. She is also survived by her sister Vernell Turner brother in law Robert Adair (Vela). She has been an active member of Trinity Lutheran Church in Klein, Texas since August, 1967. She was active in Sunday School, Lydia Guild, Anna Circle, Fellowship Club, and Sunday night Bible Study group. She and her husband conducted a Christ Care Group ln their home. She was also coordinator of the Prayer Chain Ministry and helped with the Bulletin Crew at Church. She and her husband were foster parents to over 60 infants through Lutheran Social Services of Texas Funeral Services will be held on Thursday January 23rd, 2O2O at Trinity Lutheran Church 5201 Spring Cypress RD., Houston, Texas. Visitation will be 58 p.m. on Wednesday evening at Addison Funeral on Kuykendahl Rd. lnternment will be at Trinity Lutheran Cemetery.

Vonnie Jo Pecht Adair was born October 25, 1931 in Houston, Texas to Edrnund Frank Pecht and Josoie Schuller Pecht, (who both predeceased her). She was a triplet to brothers, Vernon and Virgil Pecht. All six of her brothers predeceased her:... View Obituary & Service Information

The family of Vonnie Jo Adair created this Life Tributes page to make it easy to share your memories.

Send flowers to the Adair family.